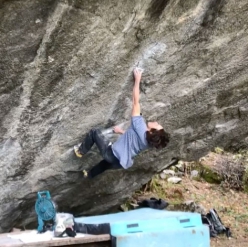 Shawn Raboutou making the first ascent of Off the Wagon Low, Valle Bavona in Switzerland
Photo by Giuliano Cameroni

American climber Shawn Raboutou has made the long-awaited first ascent of Off the Wagon Low, in Val Bavona. Reportedly graded 8C+, this is now the hardest boulder problem in Switzerland.

Young American Shawn Raboutou has hit it big in Switzerland with the long-awaited first ascent of the low start to Off the Wagon. Located in Val Bavona, Off the Wagon was freed by Nalle Hukkataival in 2012 and is recognised as one of the most famous extreme boulders in the world, in part due to the purity of the line and in part due to the fact that early attempts by Dave Graham and Chris Sharma were documented in the decade-old cult climbing films Dosage 3 and 4.

After his first ascent Hukkataival described it as follows: "Basically the boulder distills down to a really hard 2-move sequence followed by an easier but really nice outro." Few obviously managed to repeat this explosive 8B+ test, but those who did include Germany’s Jan Hojer, America’s Jimmy Webb and the Italians Niccolò Ceria and Luca Rinaldi.

As the name suggests, Off the Wagon starts - somewhat artificially - off the land owner’s farming wagon parked beneath the boulder. Shawn Raboutou has now climbed the problem crouched on the wagon instead of standing, thereby adding one very hard starting move which eluded many of the world’s best for the last decade.

Swiss ace Giuliano Cameroni witnessed the ascent and told planetmountain.com "The first move is super powerful and similar in difficulty to the stand start." So difficult in fact, that the problem may now well be 8C+, meaning that it is the hardest boulder in Switzerland and the world. At present the bouldering scale stops at 9A, with Burden of Dreams freed by Nalle Hukkataival in Finland in 2016, and only a handful of 8C+ that include Gioia (Christian Core, Varazze, Italy, 2008), Terranova (Adam Ondra, Moravsky Kras, Czech Republic, 2011) and La Révolutionnaire Extension (Charles Albert, Fontainebleau, France 2017).

Originally from Boulder, Colorado, 20-year-old Shawn Raboutou is no newcomer to hard ascents and he boasts a climbing pedigree that is second to none: he is the son of former champion climbers Robyn Erbesfield and Didier Raboutou. While Didier was one of the leading lights during the mid 80’s, Erbesfield was crowned World Champion in 1995 and she won the Lead World Cup in 1992, 1993, 1994 and 1995 as well as the Rock Master in 1994.

Off the Wagon (8c+/v16) . . full video soon (music was playing in background) . I want to mention that there are access issues. You can not try this game from April through October due to the land owner wanting to conserve the grass for his animals. Please be respectful and discreet because it's private land. @lasportivana @organicclimbing @frictionlabs . 11/27/18 (First Ascent from the low-start)

17.07.2012
Brooke Raboutou, 8c at a mere 11 years of age
At Rodellar in Spain 11-year-old Brooke Raboutou has repeated Welcome to Tijuana. In doing so she has become the youngest climber in the world to master this grade.

04.02.2016
Luca Rinaldi boulders 8B+ with Off the Wagon in Valle Bavona
Italian climber Luca Rinaldi has repeated Off the Wagon, the boulder problem graded 8B+ located in Val Bavona, Switzerland.