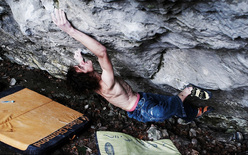 Adam Ondra has established his hardest boudler problem to date, Terranova 8C+ at Moravsky Kras in the Czech Republic.

After 12 days of effort Czech climbing ace Adam Ondra managed to send his hardest problem ever, Terranova 8C+. The problem is 17 moves long and located at the base of the Holstejn crag at Moravsky Kras.

Adam describes it as follows: "This boulder is foremost about it's difficulty. I would like to emphasize that it is not the most beautiful, exposed line in the world. It does not go on top of the stone but it is only a traverse at the beginning of the wall. I always thought that it won't be possible." Now though, with at least six 8C problems under his belt, he's come up trumps.

For the record, Ondra obviously hasn't abandoned rope and harness and in September he made the first ascent of Perlorodka 9a+ at the same crag at Moravsky Kras. Furthermore, at the end of October he made the first repeat of The Man that Follows Hell in Germany's Frankenjura which he believes is 9a not 9a+ as suggested by first ascentionist Markus Bock.