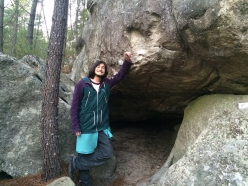 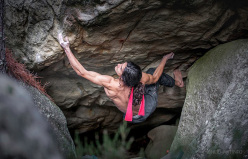 French climber Charles Albert has freed the extension to La Révolutionnaire, suggesting 8C+. If confirmed, this becomes the first problem in Fontainebleau (France) to be graded 8C+ and also one of the hardest boulder problems in the world.

Fontainebleau, the spiritual birthplace of bouldering, may well have its first 8C+. Obviously it’s been first ascended by Charles Albert, the young "Bleausard" who has made a name for himself in recent years not only for his extremely hard ascents, but also for the fact that he climbs barefoot. Sometimes even down climbing 8B+…

The other day Mowgli, as he is nicknamed by his friends, ascended without climbing shoes the extension to La Révolutionnaire, a problem he freed at the end of 2016 and which he now reckons may weigh in at 8C+. If confirmed, La Révolutionnaire represents another step forward in Albert’s climbing and is also the first in the Parisian forest to equal the heinous difficulties first explored in 2008 by Christian Core on Gioia at Varazze.

At present there is only one 9A, The Burden of Dreams freed in October 2016 by Nalle Hukkataival in Finland and awaiting confirmation.