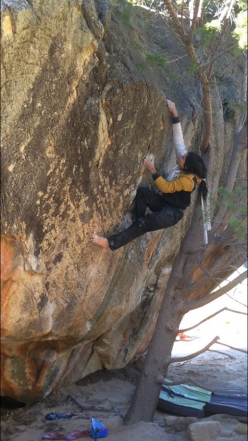 Charles Albert has done it again. The young Frenchman has climbed another 8C boulder problem barefoot. So after the first ascent of La révolutionnaire at Fontainebleau in France, afte the repeat of Le Pied à Coulisse and after having downclimbed the 8B+ Gecko assis, Albert has now repeated Monkey Wedding (V15) without climbing shoes. The problem was put up in 2002 by Switzerland’s Fred Nicole and was long considered one of the most difficult in the area.

Germany’s Alexander Megos has also repeated the line, in his usual hallmark style: at great speed. After having tried the problem for half a day three years ago, Megos now sent it in just 30 minutes.