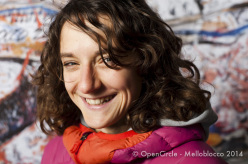 At Fontainebleau in France Melissa Le Nevé has sent her first 8B boulder problem while Charles Albert, climbing barefoot, has made the first ascent of the 8C problem La révolutionnaire.

With the onset of the cold season some good news has come from the Fontainebleau forest on the outskirts of Paris, where France’s Mélissa Le Nevé and Charles Albert have sent two difficult boulder problems: La cicatrice de l’Ohm by Le Nevé and La révolutionnaire by Albert.

La cicatrice de l’Ohm is Le Nevé’s first 8B problem and only the second 8B climbed in the forest after Catherine Miquel repeated Trafic back in 2002. A few weeks ago Le Nevé announced her retirement from the World Cup competition circuit and, free from competition demands, the first result from outdoors has flocked in fast.

For Albert La révolutionnaire represents yet another difficult send without climbing shoes. The problem is located in the Gros Sablons sector and was made famous thanks to the photos of the 19-year-old that were published in worldwide. Albert - who in October downclimbed an 8B+ problem barefoot - now suggests 8C for his latest creation.