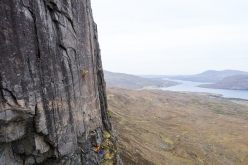 Dave MacLeod attempting what would become The Golden Road on the Isle of Harris, Outer Hebrides, Scotland
Photo by Dark Sky Media 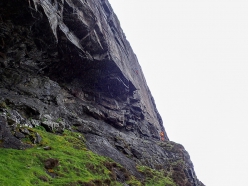 Dave MacLeod making the first ascent of The Golden Road on the Isle of Harris, Outer Hebrides, Scotland. Note the rain.
Photo by archive Dave MacLeod 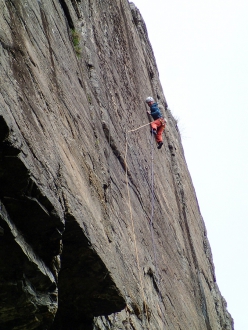 Dave MacLeod making the first ascent of The Golden Road on the Isle of Harris, Outer Hebrides, Scotland
Photo by archive Dave MacLeod 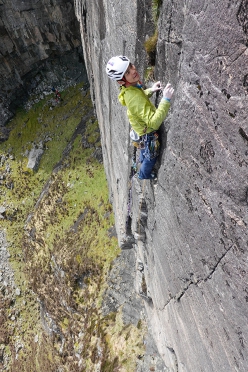 Dave MacLeod coasts along The Golden Road in Scotland

Scottish rock climber Dave MacLeod has made the first ascent of The Golden Road. Located at  Creag Mo on the Isle of Harris, Outer Hebrides, this trad climb checks in at E9.

It’s been a while since we last heard from Dave MacLeod, the Sottish climber behind some of the hardest trad climbs in the UK in summer and some of the most repulsive mixed climbs in Scotland in winter. His vertical resume spans the spectrum and includes 8c free solo - Darwin Dixit at Margalef in Spain- 8c+ sports climbing and 8C boulder as well as big multi-pitches from the Eiger to the Dolomites.

In short, a master of all trades, who the other day established a tough new trad climb on one of the remotest islands in Scotland. The route is called The Golden Road, is located at Creag Mo on the Isle of Harris, and MacLeod has graded it E9, ie once again very close to upper limit of trad climbing.

After having worked the moves, MacLeod started the lead but it then started to rain. A descent was out of the question so the 40-year-old hung on in the hope the spell would pass. "I reached a reasonable place to stop near some protection with a decent foothold for one foot. It rained for 5 minutes or so and the holds facing to the right were getting a little wet. But I just swapped feet for around ten minutes and the wind had dried the holds again. So I continued. Ten minutes after I topped out the route was soaking once again. So it was a nice example of Scottish climbing, of taking the brief window of opportunity. I couldn’t even do the moves in warm temperatures so I think if I had not done it then, in that very cold weather, I would have had to wait for September."

Golden Road gets its name from the beautiful road on the island, so-called due to the exorbitant initial cost of construction. In the past at the same crag MacLeod has established The Realm E8, The Hard Drive E7, From the Depths E6 and Drive Station E5, while a fortnight ago he accompanied visiting Japanese climber Keita Kurakami who put up Mega Kagikakko E7.

09.05.2007
Dave MacLeod Metalcore 8c+ first ascent
On 02/05 Dave Macleod made the first ascent of Metalcore F8c+ at The Anvil, Scotland. This is now the hardest sports route in the country.
12.04.2006
Dave MacLeod frees Rhapsody E11 7a at Dumbarton Rock in Scotland
Scottish Dave MacLeod has climbed the direct finish to Requiem at Dumbarton Rock, Scotland, calling the climb Rhapsody and grading the route E11 7a. This makes it a strong contender for one of the hardest trad pitches in the world.