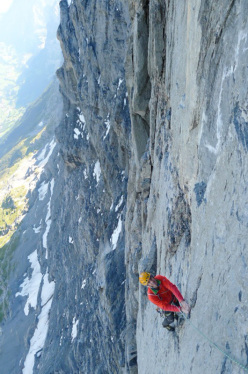 The two British climbers Dave MacLeod and Calum Muskett have repeated Paciencia (8a, 900m) up the North Face of the Eiger.

Dave MacLeod, known above all for his dangerous trad routes and his difficult ice and mixed climbs has just ascended his first alpine multi-pitch: the difficult Paciencia up the North Face of the Eiger, together with young Welshman Calum Muskett.

Paciencia was established between 2001 and 2003 by Ueli Steck and Stephan Siegrist and then freed in 2008 by the two Swiss climbers with difficulties up to 8a. The route takes a steep line through the Rote Fluh bastion on the righthand side of the face and follows a series of smooth slabs and is characterised by its continuous difficulties. So much so that after the first repeat in 2011 together with Peter Ortner, David Lama stated: "I've rarely climbed such a demanding route." A difficult line therefore up a hostile face, a stern test for anyone.

MacLeod and Muskett reached Grindelwald at the start of August and after having transported all the gear for three days to the base of the route they tried the first hard pitches to check out what lay in store before descending back down to valley. The two Brits then returned and repeated the route, with three bivies. Both climbed all pitches free and they swung leads and redpointed all the harder pitches. After the ascent Muskett commented: "Paciencia is an amazing alpine/big wall challenge and should be high on the ticklist of any climber with the capability to climb it."