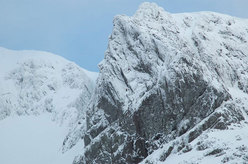 Dave MacLeod on Don't Die of Ignorance XI,11 Ben Nevis. "The reality of course is that continental mixed climbing is a million miles away from the full on Scottish experience. An M11, pre-practiced, protected by bolts, 15 minutes to climb it. This is all quite different from the huge scottish walk-in, blizzard conditions, onsight climbing, 12 hours on the route" Dave Brown
Photo by Claire MacLeod 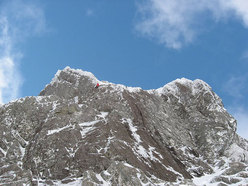 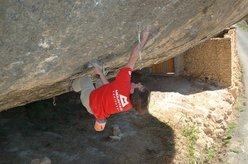 On 12 March Dave Macleod from Scotland made a solo ascent of Darwin Dixit 8c at Margalef Spain, while on 16 March he made the first ascent of one of Scotland's hardest winter routes, Don't Die of Ignorance XI,11 on Ben Nevis.

Dave Macleod is currently enjoying an unbelievable state of physical and psychological strength. Last week the Scotsman carried out an incredible 8c solo in Spain as "psychological training" for a trad project on Ben Nevis.

Macleod's 9.00 am solo of Darwin Dixit at Margalef came about after his 2007 redpoint of the route and a brief warm-up and check-up this year. He climbed without spotters or crash pads and, should the grade be confirmed, this would no doubt push soloing to a different level.

Four days later and back home in Scotland Macleod timed perfect winter conditions and his awesome physical and mental strength to perfection to carry out the first acent of Don't Die of Ignorance XI,11 on the Comb Buttress, Ben Nevis. Macleod had touted the eight pitch route over a number of years, climbing from the ground up each time before reversing back to safety on the wild traverse right.

On Sunday though Macleod, in the company of Joe French, proceeded past the point of no return, "desperately climbing in an utterly 'go for broke' style" to the belay. After French's pendulum and minor epic on the traverse, which had previously been climbed with the help of aid in 1987 by Andy Cave and Simon Yates, the two climbed the remaining 6 pitches to top out on the summit plateau in bright moonlight.

Macleod, who feels Don't Die of Ignorance is as hard as his unrepeated 2005 testpiece, The Hurting at Coire an t-Sneachda, Cairngorm has written exhaustively on his blog about both ascents, but nevertheless gave us the following insight into this quite extraordinary week of extremely bold climbing.


Darwin Dixit solo as training for your trad project on the Ben which requires requires climbing 8c+/9a in an unprotected position. How would you rate your current physical and mental state?
I feel like I'm climbing quite well just now. I had a little more time to train this winter than last winter and I've benefited a lot from moving to a new part of Scotland and climbing on different rock. I used to train at Dumbarton Rock on basalt all the time. It is superb rock for improving at climbing, but a little too much of anything is not good training practice. Up here in Glen Nevis the moves on the mica schist are more basic and fingery on flatter walls. I think this has shocked my body into improving a little. Psychologically I feel good because I have the focus of working towards something big.

There seems to be a debate about the grade - Puigblanque made the first ascent and graded it 8c, French magazine Kairn reports that Sharma onsighted it and felt it to be 8b. What are your thoughts on this?
Spanish sport grades are generally soft, but Darwin Dixit was for me the hardest route I did in Margalef and took more tries. In Margalef I also did Los Ultimo Hippies 8c, La Puta Rue 8b+, Double Iluna 8b+, Alzeimer Brothers 8b+ and Luxury 8b+. For me, Darwin Dixit was harder than all those. But maybe that is because Darwin has lots of long moves and a mono crux which is not my best style? I'm sure some other folks must have done it by now surely? It would be good to see how they felt on it.

Regardless of the grade, a solo ascent is always something extremely personal...
Yes that's correct. The grade is not the story. The story is the learning to climb hard with confidence and safety in a situation with no protection, and the enjoyment of this.

Margalef solo in Spain- then Don't Die of Ignorance in Scotland shortly afterwards. Sport and winter trad, two extremely different routes with a common denominator: extremely testing physically and mentally. Can these performances be compared?
Comparing these two ascents in overall difficulty, the winter route is much harder than soloing Darwin Dixit. On Darwin Dixit, I just had a couple of tries to learn the moves again and then came along and did it quite relaxed one morning with my wife filming. It wasn't so stressful. Don't Die caused three seasons of obsessing, lots of time trying to decide on the best tactics and a much greater level of effort and application to manage the difficulty.