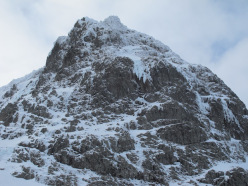 Dave MacLeod has made the first ascent of two new winter climbs on Ben Nevis in Scotland, White Noise M10+/M11 and The Snotter VIII,8.

Dave MacLeod has celebrated a fine return to form after an ankle injury by making the first ascent of two interesting, new routes on Ben Nevis. MacLeod got the ball rolling with White Noise at the Cascades on Ben Nevis, an unusual route for Scotland in that it climbs a series of thin cracks through a steep and smooth roof which rarely ice up. After checking out the line via abseil, MacLeod sent the single pitch climb which is protected by trad gear only on his fourth attempt commenting "What an ace route. It’s a great choice if the routes in the main corrie are too dangerous to approach on avalanche days, or if it’s super stormy. It went at about M10+, maybe even M11."

A few days later MacLeod returned to Ben Nevis to check out what is commonly referred to as The Snotter, a much-attempted line on Breneva Face of North East Buttress often referred to as "the last great unclimbed icefall on Ben Nevis". After a failed first attempt the Scotsman returned with Andy Nelson and the two sent the route in perfect weather conditions. A technical groove led first to a ramp and then overhanging cracks which paved the way for the right hand icicle. "The ice 'boomed' a little but seemed OK" explained MacLeod "so I quickly swung onto it and raced for the top, stopping to de-pump halfway up so I could really enjoy the position." As Nelson followed a large chunk of ice broke off but the two topped out successfully after having breached difficulties estimated at VIII,8 for what MacLeod describes as "One of the best winter climbs I've done on the Ben". Now that is certainly saying something!