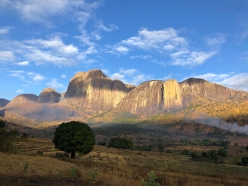 The Tsaranoro massif in Madagascar.
Photo by archive Arnaud Petit

Alan Carne, Calum Cunningham and Robbie Phillips have made the first ascent of Blood Moon (8a+, 700m) up Tsaranoro Atsimo in Madagascar.

The Tsaranoro mountains in Madagascar are like a gift that keep on giving. Ever since Germany’s Kurt Albert and Bernd Arnold established the first routes in the massif in 1995, Rain Boto (7b+, 420m) and Lemurenschreck (7a +, 420m), the huge granite walls continue to attract climbers from all over the world in search of virgin rock. The most recent addition comes from Britain’s Alan Carne, Calum Cunningham and Robbie Phillips who, after a minor epic, successfully climbed a new route up Tsaranoro Atsimo.

After warming up - so to speak - with an onsight of the recently established Arnaud Petit & co classic Soavadia, the trio made a first foray up Tsaranoro Atsimo only to be thwarted by a section of completely blank rock. A few days later they returned to attempt a line between Mora Mora and Fire in the Belly and, over the next six days, they managed to forge their 700m, 13-pitch route. This tackles a completely independent line apart from the last two pitches which it shares with Mora Mora.

After the first ascent the trio returned for the first free ascent, but unfortunately Carne took a bad leader fall and broke his leg while on the wall, resulting in what Phillips has described as the most intense day of his life. With Carne in acute pain, Phillips kept his cool and prepared the rescue abseil system while Cunningham rappelled to the base of the wall and made the 1 hour return to the campsite in just 15 minutes to alert the locals who returned with a makeshift stretcher. Carne was carried down, transported to the nearest hospital and subsequently flown to La Reunion where he underwent surgery.

Although shaken from the ordeal, the two Scotsmen retuned to the peak a few days later. Over the next three days they proceeded to free the entire line, despite running out of water and food. The aptly namend Blood Moon weighs in at 8a+ and is described to planetmountain.com by Philips as "very beautiful, up arguably one of the best and most obvious features in the whole Tsaranoro. We were very lucky to get this one."

SUCCESS!!!! Last week @calumcunningham3 and I successfully free climbed a new line on the 700m face of Tsaranoro Atsimo! For those that don't know, we attempted a line earlier in the trip only to be rebutted by the wall with sheer blankness. We took it back to the drawing board and with the assistance of Gilles Gautier's lovely set of binoculars, I spied out a line that I was certain we could figure something out on. ⠀⠀ Calum, Alan Carne and I climbed boldly upwards in true ground up style, battling it out through some dodgy flakey rock and keeping true to our personal ethics. After 6 days of hard work and some outstanding performances from all the team, we had ourselves a wonderful new line, completely bolted and ready to go! At that point, @alastair__lee had come out to capture on film some of the magic of the free climbing attempt... and that was when disaster struck with Alan's accident! (You can read all about this on the last post) ⠀⠀ When we returned 4 or 5 days later to the wall, our minds were in a slightly different place as you can imagine... It became a challenge to keep a level head and I was (I'll admit), slightly worried that the horrendous experience that we had all endured at Alan's expense would, like a rot, eat away insidiously at our positive thoughts, leaving us only with the memory of our fallen comrade, and fear where courage and ambition once resided. ⠀⠀ It became apparent however that we were stronger than that Alan had given me some positive words of encouragement before I left him; he said he wished that we'd go for it, not to hold back, but just to be careful and that he'd be with us in spirit! And with that we climbed long and hard for days, and it was on Day 3 of our free attempt, that we summited Tsaranoro Atsimo giving to the wall it's latest addition: ⠀⠀ "Blood Moon" - 8a+ or 5.13c ⠀⠀ WE DID IT GUYS!!! WE BLOODY DID IT!!! ⠀ There are too many people to thank that Instagram won’t allow me the caption length to do so So I’ll do that in the comments! #climbing #bigwall #adventure #madagascar #mad4mada

22.11.2006
Short cut 7c+ new route on Tsaranoro wall, Madagascar
At the end of September Florian Scheimpflug, Tom Sobotka, Ondra Benés and Hari Berger travelled to the Andringitra National Park in Madagascar where they made the first ascent of "Short Cut" 7c+ 750m and a repeat of "Bravo les Filles" 8b on the immense Tsaranoro wall.
11.11.1998
Madagascar 1998 climbing expedition
Never the same, a new rock climb up the granite Tsaranoro Be in Madagascar.