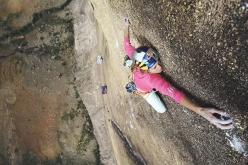 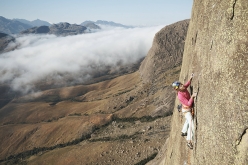 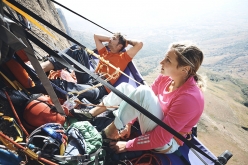 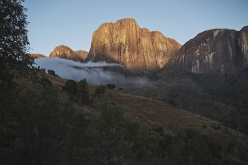 America’s Sasha DiGiulian and Spain’s Edu Marin have made what is believed to be the second free ascent of Mora Mora (8c, 700m) on Tsaranoro Atsimo in Madagascar.

Sasha DiGiulian and Edu Marin have made what is likely to be the second free ascent of Mora Mora, the 700-meter line to the right of Mai più Cosi (Never the Same) up the East Face of Tsaranoro Atsimo in Madagascar.

Mora Mora was established by the Spaniards Francisco Blanco and Toti Valés in September 1999, a year after the first ascent of Mai più Così by Rolando Larcher, Marco Sterni and Erik Svab, and was freed in 2010 by Adam Ondra during his astounding Madagascan tour de force. This also resulted in the coveted first free ascent of Tough Enough which, at the time, went down as one of the most difficult multi-pitch climbs in the world.

DiGiulian and Marin worked the individual pitches of Mora Mora in July, then spent three days climbing all pitches free, with both climbers sending the 8c crux.

In the past DiGiulian and Marin have climbed various other multi-pitch routes together, including Bellavista on the Tre Cime di Lavaredo in 2013 and Viaje de Los Locos in Sardinia in 2014. DiGiulian rates her latest ascent as her most difficult multi-pitch to date, and it goes without saying that this also checks in as the first female ascent of the route.

17.10.2010
Adam Ondra is Tough Enough on Tsaranoro in Madagascar
Adam Ondra has carried out the first free ascent in a single day of Tough Enough (8c, 380m) on the East Face of Karambony in Tsaranoro Valley, Madagascar. He concluded his trip by repeating Bravo les Filles (8b, 600m) and making the first free ascent of Mora Mora (8c, 700m).
11.11.1998
Madagascar 1998 climbing expedition
Never the same, a new rock climb up the granite Tsaranoro Be in Madagascar.