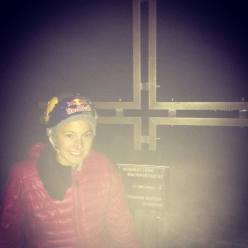 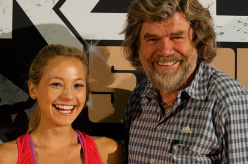 Sasha DiGiulian has made an astounding ascent, and first female repeat, of Bellavista, the milestone multi-pitch Dolomite climb established solo and in winter in 1999 by Alexander Huber up Cima Ovest and then freed in 2001 by Huber with difficulties up to 8c.

DiGiulian's repeat was a small adventure and, there's no denying it, somewhat surprising as so far the American has concentrated on hard sports climbs and her multi-pitch experience, in particular in the Dolomites, is practically zero. But in 2011 DiGiulian met Reinhold Messner and it was during that encounter that the King of the 8000ers pointed her to that enormous overhang on Cima Ovest.

A dream therefore that began two years ago and that had to wait until this summer, this August to be precise, when together with ace Spanish climber Edu Marin DiGiulian began working the route. The first five pitches - 7b, 6c+, 6a+, 7a+, 7b - were climbed on day one in two long pitches. The 8c crux pitch was attempted only once on day two and after a few rest days the crux was attempted once more, before trying the next 8a pitch. After which the duo abseiled off, in the belief that the major difficulties were below them.

12 August started cold and damp but DiGiulian was convinced it was the right day, despite the crux pitch being wet and Marin failing. She fell, too, but sent it second go and then climbed the successive 8a, and at this point they realised how much still lay in store, that despite the technical difficulties being over, they still had over 12 pitches to reach the summit. Climbing as fast as possible they were nevertheless caught by a storm circa 200m below the top, which they reached at 9pm. Not able to locate the complicated descent route, DiGiulian pulled out her phone and got in touch with the man who knows the peak better than most: Alexander Huber in person. Given the situation, the German wisely recommended they bivy for the night and continue the next morning.

"We were so wet and cold." wrote DiGiulian on her blog "Standing in the howling wind at the top, we thought this was crazy. Surviving the night at the top in our condition sounded like a feat in itself. Though, after searching for another two hours for the way down, we realized that Alex was right. Every way we walked, we faced a perpetual dark drop off the side of the tower. Down climbing was perilous because the rock is so fragile and we could only see what was in front of us through the light from our headlamps. Exhausted from the long day and the mental battle, we dozed off for about two hours shivering on a rock. At about 530am, morning dawn lit up the mountain and we optimistically continued the search down. We were frozen and tired. A warm shower, sleeping bag, and hot cappuccino sounded like heaven."

A few hours later the two stumbled safely in to Rifugio Auronzo. This adventure fortunately came to an end in the best possible way and DiGiulian concluded "Climbing Bellavista opened a new door of possibility for me." Since she's around for another 10 days, there may well be more in store!