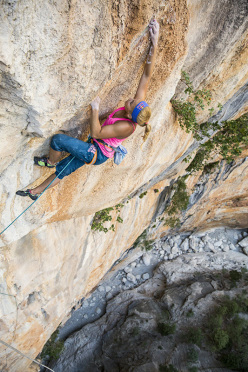 Never change a winning team. A year after their repeat of Bellavista on the Tre Cime di Lavaredo in the Dolomites, this summer America's Sasha DiGiulian and Spain's Edu Marin joined forces once again to climb another long, difficult and beautiful multi-pitch. The plan was to change massif, to attempt Zahir Plus in Switzerland's Wenden, but the bad weather that pervaded the Alps rendered this impossible. With time running short before needing to return home for university, DiGiulian and Marin changed objectives and rushed south to Sardinia, more precisely to the fantastic Gole di Goroppo. Their sights were set on Viaje de Los Locos, the route put up in 2002 by Daniel Andrada and Daniel Dulac that, with 7 pitches up to 8b+, breaches the enormous overhang just a few metres away from the world famous Hotel Supramonte.

DiGiulian's first impressions on the route weren't the best: too hard, too far away from her “comfort zone”, but after almost three weeks of trying and on the very last day before needing to catch the flight home, the two managed to redpoint the route. Marin and DiGiulian swung leads: Edu led the first 8c pitch, Sasha the second 7c+ and third 8b+ pitch, Marin then led the 8a+ and then they swung leads to the top.

DiGiulian's ascent, which she herself describes as “the most rewarding climbing experience of my life” is the first female ascent (albeit swinging leads) but, probably more importantly, is a fitting tribute to her father who passed away shortly before her ascent.