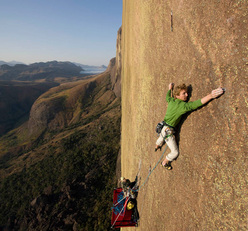 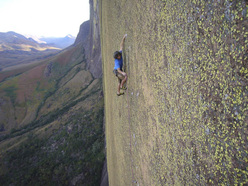 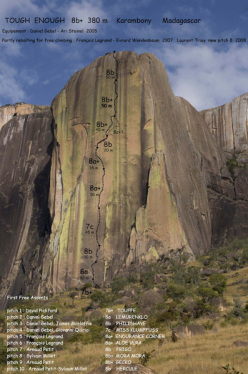 The story behind the collective effort to free all the pitches of one of the hardest big walls in the world, Tough Enough 8b+ 380m on Karambony, Tsaranoro massif, Madagascar.

In 2005 a German expedition comprised of Daniel Gebel, Ari Steinel, Uschi Beer and Joachim Seitz carried out the first ascent of a new route up the East Face of Karambony, located in the Tsaranoro massif in Madagascar. At the time Daniel Gebel managed to open the route from the ground up and climb 2/3 of the pitches up to French 8b and A3 aid. Unfortunatly Gebel fell ill and the team abandoned the mountain, leaving the complete redpoint open for others.

The gauntlet had been laid and the challenge, now called “Tough Enough”, was there for to be taken. In 2007 a group comprised of none other than François Legrand, Giovanni Quirici, Greg Sobzack and Evrard Wendenbaum got to work, modifying some of the pitches to create a more logical line. They then freed 5 of the 10 pitches, leaving the route once again incomplete, with pitches unclimbed and 4 estimated at 8c and one at 8c+.

In April 2008 the big wall saw the arrival of the British climbers James McHaffie and Dave Pickford who freed the third pitch at 8b after a crux hold had broken off.

In June the route was beseiged by Stéphanie Bodet, Sylvain Millet, Laurent Triay and Arnaud Petit who visited the island with just one aim in mind: to free all remaining pitches to the top of the mountain.

The French equipe lost no time and set to work immediately. Petit climbed the 7th pitch, a tricky traverse right beneath the roof, which went free at 8b. On the 8th pitch (thought to be 8c+) Laurent Triay opted to bolt a variation to the left and after two days of effort Sylvain Millet managed to free these perfectly vertical 40 meters at 8b+.

Petit concentrated his efforts on pitch 9, an eternal, 130 move 50 meter nigh-vertical journey... but conditions proved prohibitive. As a result he moved one pitch higher: at 8b the final pitch is a true sting in the tail to reach the top. But by now time was up and the French team had to return home. Their result was impressive to say the least: all pitches had been freed up to 8b+ except for one, that problematic 9th outing. Seeing the talent on the wall, evidently the challenge really was tough enough!

And evidently the challenge was quite something, since in September Petit was once again high on the route. The French climber explains: “mentally the 9th pitch, called Gecko, is the hardest because it is very, very long. As you inch upwards you begin to lose sensitivity in your feet. You have to wait for just the right conditions, even if windy days with temperatures below 20°C are extremely rare on Karambony. You have to imagine a 50m vertical slab with 7a Font moves, at times a bit harder, which follow each other without any good rests. I didn't have good conditions in June during my three attempts and each time I fell right from the top. When I returned in September conditions were even worse... it was even hotter, circa 28°C, I thought it it would be impossible. But thankfully I sent the pitch first go. There are some sections where I was truly at my limit, I had to fight hard and falling after a 40 minute battle with ruined fingers is really demoralising.”

For the record, two days later the extremely talented Yann Ghesquiers abseiled down the pitch placing the quickdraws and then, in a moment of pure inspiration, sent the pitch first go, marking what is undoubtedly a truly impressive ascent.

With all pitches climbed free, what now remains is the first single day ascent. Petit explains the concept clearly: “Climbing all pitches free in a single day is one of the most beautiful challenges in sport climbing at the moment, the quality of the rock is exceptional and the variety of ptiches is definitely as good as the difficulties.”

So: who's next for something Tough Enough?