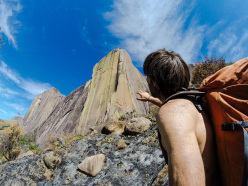 Sean Villanueva indicating the remarkable Tsaranoro mountains Madagascar. Karambony wall is on the right, Tsaranoro Atsimo with the new route Fire in the Belly (8a+, 700m) established ground-up with Siebe Vanhee in August 2015 is far on the left.
Photo by Sean Villanueva 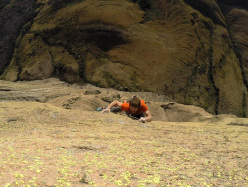 Siebe Vanhee making the first ascent of Fire in the Belly (8a+, 700m) up Tsaranoro Atsimo, Madagascar
Photo by Sean Villanueva 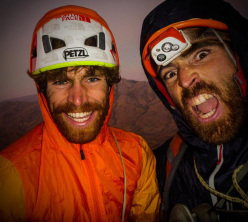 After having climbed some of the classics in the Tsaranoro valley with Argyro Papathanasiou from Greece in July, I was joined in August by Siebe Vanhee from Belgium who immediately spotted a major unclimbed line on Tsaranoro Atsimo, to the right of Mora Mora (a line freed by Adam Ondra in 2010 at 8c).

Armed with a drill, skyhooks and a thirst for exploration we tackled the face ground-up. After many doubts and 6 days of effort we finally reached the summit, having breached 700m of face climbing on black and green granite, past an extremely blank looking headwall at the very top. Convinced that the route was out of our reach and that we would therefore have to leave it for future generations, we decided nevertheless to give it a proper hard free-climbing battle, just for the fun of the fight. We returned and to our own surprise managed to free climb the entire line after three days effort on the wall, with difficulties up to 8a+. We called the route Fire in the Belly; it’s a great line and even the easier pitches are demanding.

Then in September Rakotomalala Herynony Samuel, the local paragliding and rock climbing instructor at Camp Catta more commonly known as Hery, raved on to me about an unclimbed wall a few hours away from the Tsaranoro Valley, close to the little village of Ambohimahamasy. “Just as big and as impressive as Karambony” (the wall that hosts Tough Enough) he told me!

I was skeptical… but just like a man getting married for the second time, hope prevailed over experience and I had to go and check it out. Sure enough it’s not quite as impressive as Karambony, few walls are, but it’s a nice looking wall nevertheless… Hery had very little big wall experience, especially at this difficulty and our first ascent turned out to be quite the challenge. It’s an excellent climb and even though it has bolts it shouldn’t be taken lightly, I’d define it as adventurous. We encountered loose rock, poisonous plants, bat guano, a lot of lichen and moss, jungle scrambling and a little bit of bird shit. So it was right up my alley! This first route up the Angavoa wall (Malagasy for bat) is called Mahagaga, is 250m high with difficulties up to 7c+. Special thanks to the kind people of Ambohimahamasy, for their hospitality and great energy!

Madagascar is a great place to go climbing; I was very impressed with the quality of the climbing, the warmth of the people, the food, the great weather and amazing atmosphere.