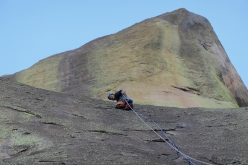 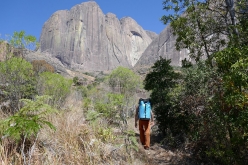 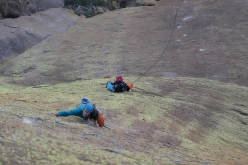 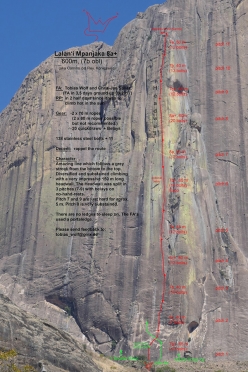 In September 2017 Tobias Wolf and Chris-Jan Stiller made the first ascent of Lalan’i Mpanjaka (8a+, 600m) up Tsaranoro Be, Tsaranoro massif, Madagascar.

If you think the rock faces in the Tsaranoro massif are saturated, think again. After the July first ascent of Rivotra Mahery on on Tsaranoro Atsimo (Matteo de Zaiacomo, Dimitri Anghileri, Marco Maggioni), in early September the Germans Tobias Wolf and Chris-Jan Stiller added another new route to the rough granite peaks, namely Lalan'i Mpanjaka up neighbouring Tsaranoro Be.

The 600 m new route was climbed ground-up over three and a half days past difficulties up to 8a+ (obligatory 7b. It starts immediately to the left of Zaza Be, crosses this on pitch two and then continues independently up the stunning yellow pillar before joining up with Vazimba (Alard Hüfner, Mike Mason, Matthew Munting, 2001) to reach the summit.

Wolf and Stiller subsequently redpointed their route on 11 and 12 September, defining it as "Definitely our best first ascents out of several hundred FA's all ground up." Unsurprisingly Lalan’i Mpanjaka translates into English as King Line.

24.08.2017
New Tsaranoro climb in Madagascar by Italian Ragni di Lecco
In July 2017 the Italian climbers Matteo de Zaiacomo, Dimitri Anghileri and Marco Maggioni belonging to the Ragni di lecco climbing club made the first ascent of Rivotra Mahery (strong wind) a new 700 meter rock climb with difficulties up to 8a+ on Tsaranoro Atsimo in Madagascar.