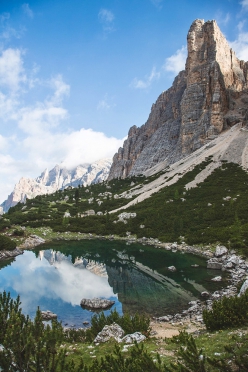 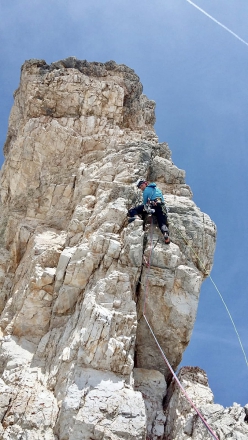 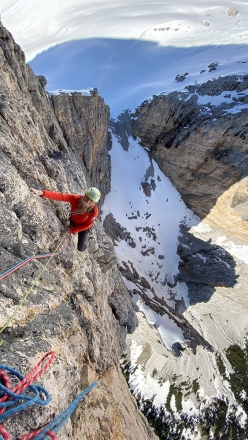 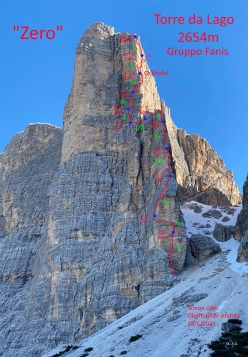 On 28 May 2021 the two mountain guides Simon Gietl and Andrea Oberbacher made the first ascent of Zero, a new multi-pitch route on Torre del Lago (Fanis, Dolomites).

The two Italian mountain guides Simon Gietl and Andrea Oberbacher got off to an early start in the Dolomites this summer with the first ascent of Zero up the southeast arete of the picturesque Torre del Lago (2654m). Gietl had noticed the logical line while establishing Can you Hear Me? on nearby Cima Scotoni and, incredulous that the arete proper was still untouched, he teamed up early on 28 May with habitual climbing parter Oberbacher.

On reaching the base of the wall they located a "great crack" just to the left of the arete that then took them "logically and past not extreme difficulties, but constantly in the region of grade V and VII" to the summit. Gietl told planetmountain.com "we were surprised by how smooth everything went, we managed to free climb everything, and also to protect ourselves well with trad gear. Our pegs always remained in the bottom of our rucksack backpack." Hence the name, Zero.

"It's nice to open a difficult route in the Dolomites, to have a hard time and then to be rewarded with a redpoint, but I must say it's just as satisfying to establish something that's a bit more relaxed. I reckon this new route might become very popular: although the rock still needs a bit of cleaning, it's good quality and provides good pro. It's important to take two sets of cams, you'll need at least two of each color up to red. We left some threads in-situ, to indicate the direction we took."

04.07.2012
Agoge, new climb on Cima Scotoni by Gietl brothers in the Dolomites
On 26/06/2012 Simon Gietl and his brother Manuel completed Agoge (VIII/VIII+,400m), a new rock climbing up Cima Scotoni in the Italian Dolomites.