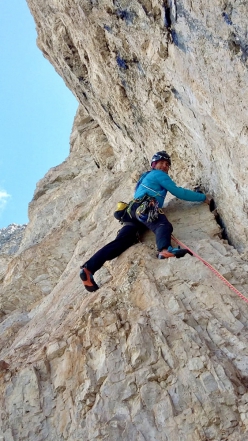 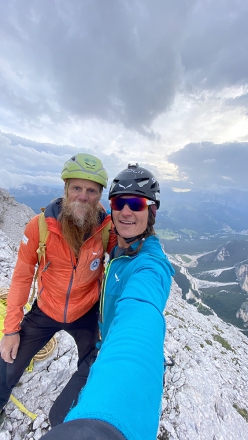 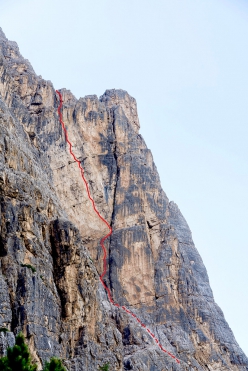 The two mountain guides Simon Gietl and Andrea Oberbacher have made the first ascent of Lifestyle, a new multi-pitch rock climb up the west face of Torre del Lago (Fanis Group - Lagazuoi group) in the Dolomites.

The day after making the onsight first ascent of DNA on the south face of Cima Ovest di Lavaredo in the Italian Dolomites, Simon Gietl and Andrea Oberbacher rushed across to Torre del Lago in the Fanis - Lagazuoi to try their luck on the mountain's west face. After an initial forray, they returned on 13 July to complete the line and make its first free ascent.

The new route is called Lifestyle and climbs the obvious yellow wall, clearly visible from the Capanna Alpina car park at Armentarola; Gietl had noticed the face years ago, whenever he climbed on nearby Cima Scotoni.

On 22 June the two mountain guides set off with two options in mind: climb either to the left or to the right of the obvious corner that slices down the face. When they reached the base though they noticed old pegs to the right, hence they opted for the lefthand line. Gietl led the first 6 pitches until, weighting off a cam, he placed the first peg on any of the pitches. The duo retreated and on 13 July returned to finish the route. Gietl completed the sixth pitch and, after lowering back down to the belay, immediately freed this pitch before continuing to the top.

"It's a beautiful corner and offers some very varied climbing. We didn't feel too bad when we discovered the pegs on the right, but had we stumbled across something on our route on the left, well, I would have been really sad" Gietl explained.

For the record: at present it is unknown who climbed both the obvious corner and the line on the right. Should you know, get in touch!