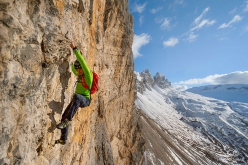 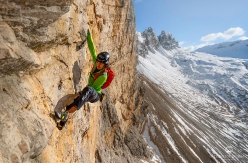 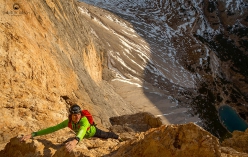 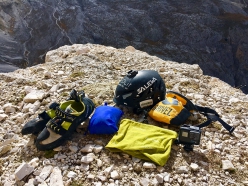 Interview with Simon Gietl after his ascent free solo ascent of Via Lacedelli up Cima Scotoni in the Dolomites on 18 October 2018.

The news has trickled through only now: on 18 October 2018 Simon Gietl made a free solo ascent, ie without rope and harness, of Via Lacedelli up the southwest face of Cima Scotoni. This is a classic outing in the Dolomites, established in 1952 by the young Cortina Scoiattoli Lino Lacedelli, Luigi Ghedina and Guido Lorenzi and now soloed by the 34-year-old mountaineer from South Tyrol. Needless to say, this is an important achievement - the climb tackles difficulties up up to VIII-, is 450m high and breaches rock that isn’t the best quality - and it’s superfluous to underline that free solos are a facet of alpinism that are completely personal and utterly dangerous. Having said that, here is our interview.

Simon. Why this free solo of Via Lacedelli?
For me it is one of the most beautiful climbs in the Dolomites and in 2003 it was the first difficult, long and exposed route I climbed. At the time I wasn’t able to climb it free. Three years ago I had the pleasure of accompanying a client on the route and it was then that I started thinking about what it would be like to climb it without a rope.

We've known you for a long time, but not for daring solos
I’ve climbed some routes without the rope in the past, such as Via Cassin, Via Comici - Dimai and Via Innerkofler at Tre Cime di Lavaredo. But always with a harness, which obviously makes a huge psychological difference, because if you need to, you can always protect yourself. On the Cassin route I self-belayed on the crux pitch and also on the traverse, even on the Comici I self-belayed one section, while on the Innerkofler I didn’t need to.
I also climbed the Egger - Sauscheck on Cima Piccola in 2017 without a rope for the film “Manaslu - Mountain of the Souls". So I've already done a few things of this sort in the past. But the difference with Via Lacedelli is that I’d never planned these climbs in advance, unlike Via Lacedelli.

Tell us more
I really stayed to think about it when I made the first ascent of nearby Can you hear me?. Every time I climbed up that route loaded with a heavy rucksack I looked across towards Via Lacedelli and wondered what it would be to climb it in a lightweight manner. What it would be like to have nothing with me except climbing shoes and chalkbag. After my expedition to Pakistan I wanted to make the first one-day redpoint of Can you hear me?, the weather was perfect, but I got tonsillitis and had to take antibiotics for 10 days. I was no longer on top form and so my dream of the redpoint vanished. But the weather remained stable, so I climbed Lacedelli with a friend, Klaus Gruber.

Did he know about your intentions?
No, nothing. I didn’t talk to anyone about my project. Not even my wife. After my solo Klaus told me it had seemed strange to him that I’d studied the crux pitch so carefully. He wondered if maybe I wanted to climb it solo, but we never discussed it.

Then came your solo
No. Well, I climbed the route with Klaus 8 days before my free solo. I returned 3 days before I my solo, this time alone but with a rope and harness. I studied the route carefully, in particular the crux pitch. And it felt good. Obviously there’s always a degree of residual risk, but I was completely convinced I was capable of climbing it without a rope. Actually, I could have done it that same day, but I said to myself "Take your time and wait for the right day to come."

Which came three days later. How did it go?
Honestly? Easier than I imagined. Everything was perfect and there was no moment when I didn’t feel safe. I knew everything by heart. I knew every single handhold and foothold. And after the crux pitch I completely enjoyed the rest of the climb. As I said, it’s a wonderful route and this was important to me, too. I wanted to climb something where I’d have fun.

And...?
I set off relatively late, I started walking towards the base of the mountain at around 11:00. I happened to meet Alex Walpoth and Tito Prinoth and we walked up together, then just before reaching the base we separated, they headed up towards Zauberlehrling, the Sorcerer's Apprentice, while I went to Via Lacedelli. I didn’t take a watch with me, because I wanted to live the experience intensely and not be influenced by time. But I know exactly how long it took: 1 hour and 32 minutes to the ledge. I know this because I filmed myself on the climb, and my GoPro can film for an hour and a half. When I sat on the ledge to take off my climbing shoes I heard it click and stop filming.

So where do the photos come from?
They were made later. In the photos I'm exactly the same as during the free solo, except that there were shot a few days later. I wanted to go back and document the ascent. I can’t really say if this is my last free solo, but climbing Via Lacedelli solo was something very special for me and I wanted some photos that capture the moment. So I returned with photographer Christof Ursch and he took pictures of me on the crux pitch and also pitch seven.

How have people reacted?
So far I haven’t really taken it all in. I climbed the route just for myself. What I experienced up there was very intense and will accompany me throughout the rest of my life. Opinions vary, but I think that’s only normal.

And now?
Now the project is over and remains a strong recollection. I honestly did not realise that it was all over until the next morning, when I woke up. My first thought was no longer Via Lacedelli. In truth, even if I’d wanted to, i wouldn’t have been able to stop it.

You said before, there’s always a degree of residual risk
Yes, and I am aware of this. I tried to reduce this risk to a minimum and I worked the way carefully, learning in particular all the holds I had to trust. This is a very difficult subject. But I’m certain about one thing: I’ve climbed routes with a rope where I’ve risked far more.

Simon, in all honesty ... was this really necessary? You’re also a father now
For me one thing is obvious: if I am at the base of a climb and don’t feel 100% convinced, then I give it a miss, as always. It isn’t easy to put this feeling in words. Let’s just say that at that moment it seemed right, so I did it. I felt the need to experience this.