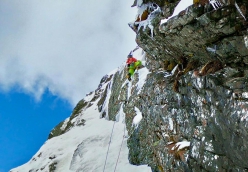 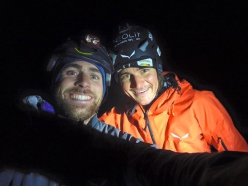 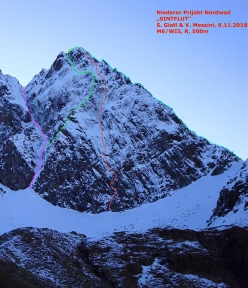 Simon Gietl and Vittorio Messini have made the first ascent of Sintflut, Deluge, a new ice and mixed climb up the north face of Mount Prijakt in Austria. Messini reports.

A somewhat unknown mountain, which with its imposing shape dominates the valley below, towers above the western part of the Schober massif in East Tyrol. Mt. Prijakt. A peak with two individual summits, separated by a characteristic gully, that has always fascinated hikers. So far though this mountain has attracted relatively little attention of mountaineers.

With the exception of the normal route, the most popular outing is definitely the West Ridge, which has some pleasant sections up solid rock. In recent years the North gully has become increasingly popular as the lack of snow at the start of winter makes this an ideal destination for beginners. In the early 2000s, Isidor Poppeller managed to climb a new route solo up the North Face of Lower Prijaktes which, even today, has remained unrepeated.

I’ve summited the mountain several times while guiding clients up the classic routes, always wondering if one could climb a more direct line... maybe in summer. After a brief inspection from the west ridge however I quickly abandoned this project, the rock was too moss-covered to have fun in the summer. What would be needed here were decent winter conditions.

For the past three winters I’ve always made my way up to the Hochschober Hut at least once in order to observe the face, but the snow was always too poor or there was too little ice.

Last week, while talking to Simon Gietl about nothing very much, we agreed to climb something up a north face. Where we’d go didn’t really matter. Maybe conditions up there were good I thought to myself, and gave myself 50-50 odds since none of us had been in the mountains after last week’s torrential rains.

When we started our approach and saw the wall from afar things seemed very promising: either fresh powder or perfectly consolidated snow. During the approach on compact snow we realised that things might indeed be perfect, and they were. About ten demanding pitches up snow, ice, across snowfields and past mixed led to easier-angled terrain, where after tiresome trail breaking we summited at 18:00, in the light of our head torches! We’d just had a completely unexpected adventure, up a fantastic face, in conditions that probably don’t occur more than once every ten years!