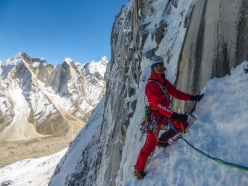 The video clip of Simon Gietl and Vittorio Messini making the first ascent of Shiva’s Ice, their new route up Shivling (6543 m) in the Indian Himalaya.

Just a few days after breaking the news of the first ascent, here is the first footage of Shiva’s Ice,the new climb established in October 2017 by Simon Gietl and Vittorio Messini up Shivling (6543 m).

08.06.2012
Valery Rozov and the B.A.S.E. jump off Shivling in Himalaya
On 25 May 2012 Valery Rozov from Russia made the highest BASE Jump in the world by leaping from 6420m just below the summit of Shivling in the Himalaya.
15.01.2001
Piolet d'Or awarded to Thomas Huber and Iwan Wolf
Thomas Huber and Iwan Wolf awarded prestigious Piolet d'Or 2001 by Montagnes Magazine for Shivas Line on Shivling