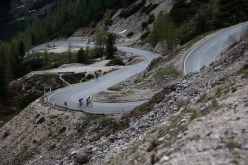 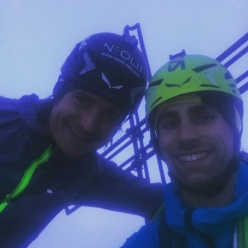 In a mere 47 hours and 16 minutes the alpinists Simon Gietl and Vittorio Messini climbed the north face of Ortler, Cima Piccola di Lavaredo and the North Face of Grossglockner in Austria. The alpinists traveled from one mountain to the other on foot and by bicycle.

Last night Simon Gietl and Vittorio Messini completed their project of climbing Ortler, Cima Piccola di Lavaredo and the North Face of Grossglockner in less than 48 hours. The two alpinists did so in 47 hours and 16 minutes, travelling between the mountains on their bikes

The two mountain guides set off from Solda on Sunday at 19.00 and ascended the North Face of Ortler (3905m). After having struggled against decidedly sub-optimal conditions they reached the summit at around midnight from where, joined by two friends, they skied down to Stilfs before riding 246 km through the pouring the rain to reach the Tre Cime di Lavaredo.

They reached the base of Cima Grande at 19:00. The original project was to climb the classic Comici - Dimai but given the prohibitive conditions - the face was completely soaked after the hailstorm a few hours earlier - after three pitches they diverted to Spigolo Giallo on the South Face of Cima Piccola, requiring 1 hour and 30 minutes to reach the summit. After rappelling they got on their bikes once again, crossed the border and after 117 km reached the base of Grossglockner, the highest mountain in Austria,. Following the classic Mayerl ramp they summited at around 16:00 and then descended to the Lucknerhaus hut where they stopped the clock after 47 hours and 16 minutes.

The project, Gietl explained, came about after the immense undertaking carried out by Hans Kammerlander and Hans-Peter Eisendle who in 1991 managed to link the North Face of Ortler with the Via Comici up Cima Grande di Lavaredo in less than 24 hours. Obviously they travelled to the two mountains by bicycle.

"After the 31.5 hour climb up Fitz Roy in Patagonia with Gerry Fiegl in 2014 I began to wonder how long I could go without stopping." Gietl told planetmlountain.com. "Despite the bad weather I’d say we did rather well, only at around 4 am while cycling to Grossglockner did we have to really watch out and not fall asleep on the spot. We therefore decided to rest for 10 minutes in the minibus that accompanied us. Thanks to that break we recovered completely, it’s amazing what a difference 10 minutes of sleep can make. This undertaking has taught us a lot about our physical limits."