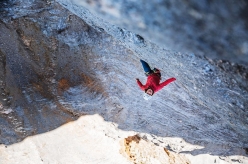 Simon Gietl climbing Stigmata, established with on Heiligkreuzkofel in the Dolomites
Photo by Matteo Mocellin

Climbing video: Stigmata up Heiligkreuzkofel in the Dolomites by Simon Gietl, Andrea Oberbacher

The trailer of the new multi-pitch rock climb Stigmata on Heiligkreuzkofel / Sass de la Crusc in the Italian Dolomites, freed in summer of 2017 by Simon Gietl and Andrea Oberbacher.

Admittedly it's only a short trailer, but this spectacular footage filmed by Matteo Mocellin is more than enough to comprehend the beauty of the new route established by Simon Gietl and Andrea Oberbacher on Heiligkreuzkofel in the Dolomites. The two forged the line in 2016, a year after having made the the first ascent of Voodoo-Zauber on the same face.

The new route climbs to the left of the famous Livanos Pillar, tackles difficulties up to X-, has no bolts and was freed last July. All details of the first ascent of Stigmata will follow in due course, in the meantime here’s an "appetiser".