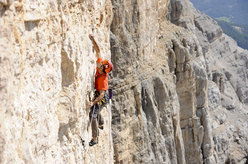 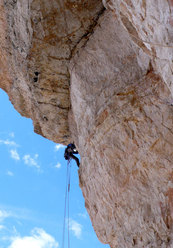 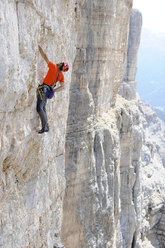 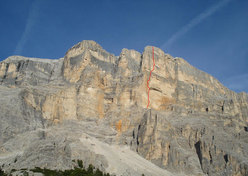 The photos and film made during the ascent are part of a evening show elaborated by Andrea Tosi and Paola Finali during which Nicola Tondini gives a sweeping view of his vertical activity. In particular, this concentrates on Tondini's "trad" first ascents in the Dolomites, his hard ground-up sport route first ascents and important repeats (such as the Messner route on Pilastro di Mezzo del Sass dla Crusc and the famous section on the "Messner slab").

Another new route on Sass dla Crusc (Dolomites) by Nicola Tondini and Ingo Irsara who established Quo Vadis on the massive mountain face, the symbol of the Val Badia.

After Menhir, Nicola Tondini and Ingo Irsara have also established Quo Vadis. Two new routes, both climbed in 2010, up the magnificent West Face of Sass dla Crusc... If this isn't a small obsessive love affair, it's certainly something remarkably similar... So much so that Tondini had already established La Perla preziosa in 2008 with Zandegiacomo and Sartori, while three years earlier together with Adam Holzknecht he had carried out the first repeat and first winter ascent of "Loss lei, heb schun", the route established by Helmut Gargitter and Renato Botte in 2003.
This latest creation, Quo Vadis, climbs the large yellow lower wall and touches on the left-hand side of the immense roof which marks the right-hand pillar, and then winds its way up the compact wall between the "Mutschlechner-Grossrubatscher Memorial Route" (Cristoph Hainz & Andrea Oberbacher, 1991/1994) and Jugendliebe (Othmar Zingerle & Michi Andresla, 1992). According to Tondini, Quo Vadis is "sufficiently distant" from these two great and difficult routes meaning that the new line is completely autonomous. The Italian mountain guides needed 8 days to climb the 470m line during which they attempted to use a minimum number of bolts and climb as much trad as possible. "Of the 14 demanding obligatory sections (graded between 7a - 7b+)" Tondini explained "11 are protected by pegs and 3 by bolts. 2 of the 3 crux sections (7b/7b+ obl.) aren't protected by bolts." As the two first ascentionists underline, a complete redpoint ascent has been postponed to next season and the precise difficulties still need to be defined properly. In the meantime though Quo Vadis, as can be gleamed from their report, photos and videos, represented a tough challenge.


QUO VADIS by Ingo Irsara
What can be said about these two new routes? Menhir and Quo Vadis are two entirely different worlds. Menhir isn't banal by any means, even if it's only 5 pitches long. But compared to Quo Vadis it seems like a walk in the path. Menhir is a small work of art, established in two days offering technical and sustained climbing which could become a classic up this face. Quo Vadis, despite being one of the most obvious lines on Sass dla Crusc, has all the hallmarks of becoming even harder still. The first ascent turned out to be a true and proper adventure and I often asked myself just what I was doing half-way up this face. Almost constantly overhanging and airy, the advantage here is that if you drop something - like Nicola's shoe at the start of the third ultimate pitch - then it falls straight down to the start, without ever bouncing off the wall. In short, Quo Vadis really tested us both physically and psychologically. I've repeated almost all the difficult routes on this face (apart from the classic ones, also the recent additions Jungendliebe [Zingerle/Andres, 1992: VIII], Auf die Felsen, ihr Affen first winter ascent [Hainz/Astner, 1994: VIII], Silberschrei first repeat [Auer/Schrieber, 2005: IX], La Perla Preziosa [Tondini, Zandegiacomo, Sartori, 2008: IX]), but this is certainly the hardest. I can't wait to try the redpoint next year. It'll certainly be another great adventure, to be savoured once again.
Ingo Irsara