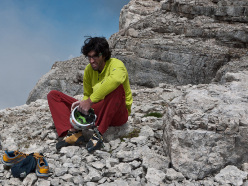 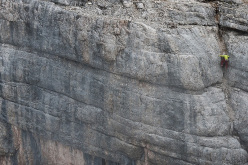 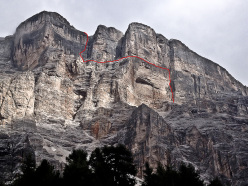 On 26 August 2015 the Austrian alpinist Hansjörg Auer made a free solo climb of Mephisto, the route established in 1979 by Reinhard Schiestl and Luggi Rieser on Sass de Crusc in the Dolomites

Here we go again. Cyclically it resurfaces. Like a wave, overwhelmingly powerful, unstoppable. A force which, to those who endure its surge, must be listened to carefully and with utmost intelligence. And a force which, to those who like us act as spectators, must simply be acknowledged. We are obviously talking about Hansjörg Auer, the Austrian alpinist who after his astounding ropeless ascent of the The Fish Route / Via Attraverso il Pesce on the South Face of Marmolada in 2007, and after his free solo of Bayrischer Traum on Schüsselkarspitze in 2011, now returns with another ascent of absolute importance: Mephisto free solo on Wednesday, August 26.

Mephisto is the historical climb on the West Face of Sass de la Crusc - Heiligkreuzkofel in German - put up in 1979 by two of the strongest Austrians climbers of that era, Luggi Rieser and Reinhard Schiestl, who in just five hours on that 16th of July introduced the first grade VIII climb to the Alps. Using, for the record, only three intermediate pegs along the way. In short, a legendary climb first ascended by two alpinists that Auer holds in the highest regard and for whom he now says: "what they did back in 1979 was simply incredible. With the gear of that era! Theirs was a visionary idea, quite simply a masterpiece of hard free climbing up in the mountains."

Auer obviously knew all about the history of Rieser, Schiestl and their Mephisto, but it was only on Sunday, 23 August 2015 that he climbed the route for the first time. And it was then, climbing it with his girlfriend, that he realised the time had come to vent what had been growing inside him for so long.

"I have been plagued by inner turmoil for some time now." says Auer "It is difficult to explain; a drive revolving around pure motivation, egotism and a hankering need for solitude, which grows exponentially within me. This state of mind is impossible for me to share with others. Who am I supposed to tell? Who is genuinely going to understand and from whom do I need to ask permission to realise my goal? Such questions, although left wide-open, trigger much thought and internal debate that only I, alone, can resolve."

These questions arose that Sunday, when conditions were far from perfect. Auer repeated the route with his girlfriend without a fall, but told us the crux didn’t feel simple. In the slightest. Nevertheless it was there, right after that famous section of "three difficult moves on small crimps" that the spark was lit. He understood that the pressure that had been building up so dramatically ever since his return from an expedition to Siberia had finally found its safety valve. Auer confided his thoughts to a good friend, Mathias Nössig, and a few days later the two hurried down to Val Badia. They waved goodbye at the foot of pedestal, Nössig raced up the via ferrata towards the summit while Auer, in just over an hour of "intense climbing", entered into his inner realm so difficult to share and comprehend.

"What I do know," says Auer "is that for me personally this route marks a very important step, because I always thought I’d stopped free soloing for good. The right moment never came again and so I believed it was all over. Instead, it arrived. And once again it was brilliant. Emotions are really personal and difficult to describe, but as always I had that feeling of being completely alone, of being utterly weightless, of being absolutely focussed. Soloing a route in the mountains, where I know I cannot allow myself to make even the slightest mistake, is one of the most intense feelings climbing gives me."