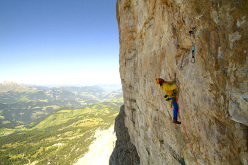 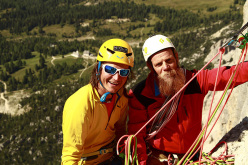 Simon Gietl and Andrea Oberbacher have made the first free ascent of Voodoo-Zauber (IX-, 180m) on Heiligkreuzkofel / Sass de la Crusc (2718m) in the Dolomites.

Over a three day period in September 2014 the South Tyrolean mountaineers Simon Gietl and Andrea Oberbacher forged a new rock climb up Heiligkreuzkofel, also referred to as Sass de la Crusc, high above Val Badia in the Italian Dolomites. The route, called Voodoo-Zauber, climbs six independent pitches up the righthand side of the face, to the right of the Central Pillar put up in 1970 by Hans Frisch and P. Corradini, and to the left of Ihr Affen, established in 1994 by Christoph Hainz and Kurt Astner.

Gietl and Oberbacher climbed the route ground-up, without fixed ropes or bolts, and returned on 7 August 2015 for the first free ascent. "Initially I thought the route would be much easier" Gietl told planetmountain.com "in the end though it turned out to be harder than expected, with difficulties up to IX-". It’s worth noting that some Friends on the crux pitch had previously been left in-situ for the redpoint ascent.

Voodoo-Zauber is Gietl’s second new climb on Heiligkreuzkofel after his 2013 creation Vergissmeinnicht. Last year on the same peak Gietl teamed up with Adam Holzknecht to carry out the first winter ascent of Wüstenblume.