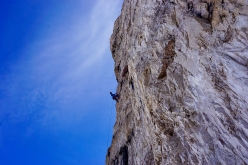 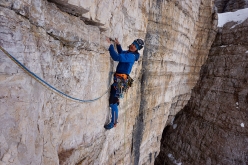 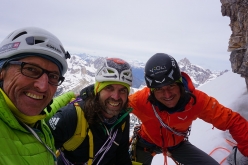 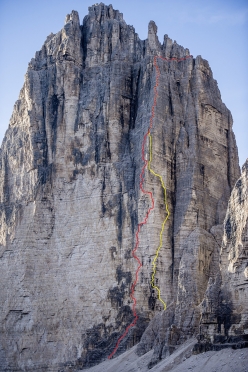 Simon Gietl, Thomas Huber and Rainer Treppte have made what is likely to be the first repeat of La Strada, the route up Cima Grande di Lavaredo, Dolomites first ascended by Polish climbers Piotr Edelman and Jan Fijalkowski on 6 and 7 August 1980.

Over several days at the end of April and beginning of May the alpinists Simon Gietl, Thomas Huber and Rainer Treppte repeated La Strada, a little-known route on the righthand side of the North Face of Cima Grande di Lavaredo in the Dolomites. Established in 1980 by the Poles Piotr Edelman and Jan Fijalkowski between 6 and 7 August, the climb fell into oblivion, probably due to the fact that a section is often wet.

In 2016 Gietl established Das Erbe der Väter with Vittorio Messini immediately to the right of Via Comici on Cima Grande and, intrigued, he decided to try La Strada. Together with Huber and Treppte he repeated the route over several days: on 28 April they climbed up to the big corner, fixed their ropes and descended, while the next day they jugged up the fixed ropes and climbed to to the bivy but then descended once again as it had started raining. They sought shelter in the winter room of the the Auronzo Refuge and, because of the bad weather, they rested another day. On 1 May 1 they climbed back up the fixed ropes and completed the route, having climbed past VII+ difficulties and having breached the wet sections climbing using A2 aid climbing.

"We climbed some sections with the use of aid since they were wet, but also because on some sections the rock isn’t perfect." Gietl told planetmountain.com “For a free ascent the route would need some cleaning, and we need to improve some belays, but the Polish route is a great climb and I discovered that my Das Erbe der Väter only shares the last three shots with La Strada, where the angle eases off and the climbing becomes easy."