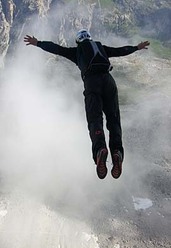 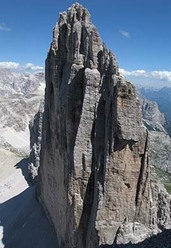 Usually when one thinks about the Hubers and the Tre Cime di Lavaredo one thinks about Alexander. About his Bellavista on Cima Ovest first ascended in winter and then freed in summer, about Pan Aroma on Cima Ovest once again and about his solo of the legendary Hasse Brandler. Now though its his elder brother Thomas who is in the limelight: after 3 years of trying on 15 August the German mountaineer finally managed to realise an old dream of his, to climb to the summit of all three Tre Cime di Lavaredo peaks and jump from the summit with a parachute.

This is the order of play: Thomas set off at 22.30 up Alpenliebe (9) on Cima Ovest with Peter Anzenberger. All went according to plan until the 10th pitch, when Thomas suddenly ran out of... batteries. Chances of reaching the belay were nigh on nothing and Thomas took a fall into the dark night. During his second attempt a hold broke and down he fell once again, but he was third time lucky and the road to the summit was now open. Eight pitches later and the two finally reached the top at 04.00, but the duo had to wait for first light before B.A.S.E. jumping down the Scoiattoli arête. Which translates into a 5 second free fall...

At 7.00am it was time for the famous Das Phantom der Zinne (9+) on Cima Grande together with his brother Alexander. The climb went smoothly, even though Thomas began to feel the first signs of fatigue - which soon disappeared as three BASE jumpers thundered down over their heads! The summit was reached at 14.00, but the jump was taken from the large ledge lower down. 8 seconds of free fall...

The adventure then continued on CIma Piccola, where at 15.30 Thomas roped up with Martin Kopfsguter to climb Ötzi trifft Yeti (8+). Thomas fought against tiredness and Kopfsguter had to wake him on numerous occasions on the belay, but at 19.30 the two safely reached the summit.

What else can be added? in brief, Thomas climbed circa1500m divided up into 48 pitches, with two BASE jumps in between. A lot? Not very much? Who knows... But as he himself says, he had reached his goal. Then, reliving that moment, he added "For a brief moment I feel in a foreign world... a long story full of emotions, with ups and downs finishes - happily - now."