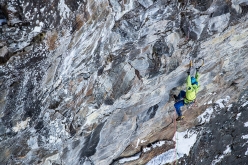 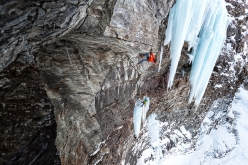 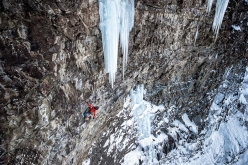 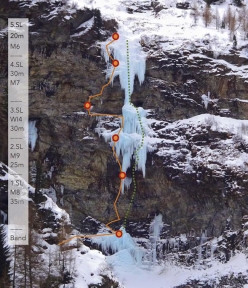 The line of MFG (M9, WI6, 120 m) at Rein in Taufers, first ascended by Gietl and Vittorio Messini
Photo by Matteo Mocellin / Storyteller-Labs

Simon Gietl reports about MFG, a new mixed climb at Rein in Taufers in the Dolomites, Italy, first ascended with Vittorio Messini.

The Rastentalfall waterfall at Rein in Taufers is certainly one of the most impressive waterfalls in the entire valley. Usually the beautiful and highly popular Crazy Diamond comes into condition almost every year, meaning that it gets repeated each season. This year, too, it formed well and since it’s almost opposite my front door I climbed Crazy Diamond four times in 10 days.

Every time I reached the base of the drip I looked towards unclimbed terrain on the left. Slowly but surely I came up with the idea of climbing something new over there, and during an early repeat of Crazy Diamond I told Vittorio Messini about my plan. About a fortnight weeks later I called him to ask if he had time and still wanted to try the line. Without thinking too much he said yes and on 18 January we hauled all the gear up to the waterfall.

We couldn’t wait to get started. It was important for me to ascend the route without bolts and I must admit that nature has been generous with us. Again and again we stumbled across thin cracks that enabled us to hammer in some good pegs. With a mix of free climbing and aid climbing we made our way upwards. After reaching the first drip we established a belay on a small ledge. The first 35 meters were below us and the day was slowly coming to an end.

Satisfied we abseiled back down to the ground and early the next morning, with renewed vigour, we set to work again. The second pitch took us leftwards, where after 15 meters we managed to sink our axes into the ice again. Before the end of the day we had completed another pitch and a half.

We returned on 25 January to finish the route, bursting with energy. A thin ramp led from left to right where once again we reached another beautiful dagger. Ten meters higher there was decent place for the next belay on two ice screws. On the last pitch we decided to climb to the left, initially following a thin sliver of ice plastered onto the rock, then along the final dagger. Another 15 meters of great climbing brought us to the end of our route. We were overjoyed!

Five days later we returned to the route to make the first free ascent. After cleaning the route and attempting the most difficult sections, we managed to free every pitch. And since we then added some pegs and left some quickdraws insitu in order to make repeats pleasant, we decided to call the route MFG, which stands for "Mit freundlichen Grüßen", with our best regards ;-)