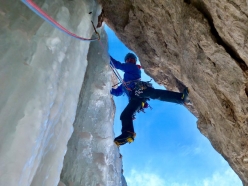 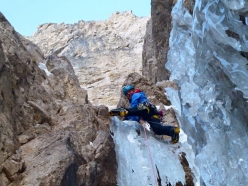 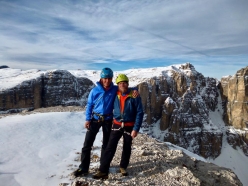 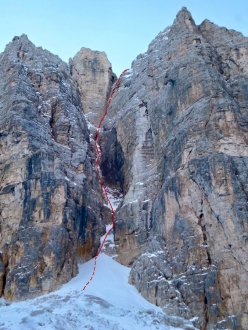 Dolomites Val Mesdì and the ice climb up Pizza Longata

The topo of the icefall climbed in December 2016 by Mountain Guides Simon Gietl and Andrea Oberbacher in Val de Mesdi, Sella group, Dolomites. Not necessarily a new route, but certainly a great winter climb.

Last winter the following appeared on Facebook "Great ice climb in Val de Mesdi, circa 300 mettere high, max WI 4, highly recommended." This brief description was written by South Tyrol’s Simon Gietl who, with his regular climbing partner Andrea Oberbacher, had made the long approach up the Mittagstal in order to repeat another climb.

During the approach however the two noticed a drip on the left, immediately below Pizza Longata, and rapidly changed plans. It’s unclear whether what they ascended that day is new or not - according to the two mountain guides in more snowy winters the drip immediately gets covered, just like the unknown route up Torry Vitty. What is clear though is that immediately after that brief appearance on Facebook, queues formed below the climb for the rest of the season. Here’s the topo therefore of a route that became an instant classic.