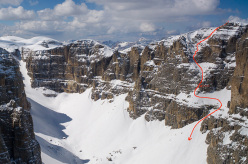 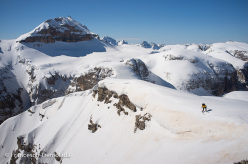 On 09/05/2014 Francesco Tremolada and Andrea Oberbacher skied a new line down the East Face of Sass de Mesdì that leads directly into the famous Val Mesdì, Sella, Dolomites.

What is the most famous off-piste route in the Dolomites? Difficult question, but certainly the spectacular Val Mesdì in the Sella group is one of the most popular runs in the Pale Mountains. So much so that it is sometimes referred to as the Vallée Blanche of the Dolomites.

What is surprising therefore is to find out that the mountain guides Francesco Tremolada and Andrea Oberbacher have now skied a new descent down the steep rock faces that plummet into the valley. The line is "beautiful but exposed", leads from the summit of Sass de Mesdì down into Val Mesdì, and was skied last Friday with just one short abseil to breach a vertical section. The overall difficulties weigh in at 5.2/E3 and the obvious question is "Why on earth wasn't such a peach route skied beforehand?" The answer is simple: the line is almost completely hidden from view, wedged in between the rocks and visible only from the summit of Piz da Lech. According to the Italians, after having scoped the line the key to success was finding the right conditions and only now, after Oberbacher's recent ascent of Piz da Lech, did they have confirmation that conditions were perfect.

"The descent is far more beautiful than we had originally thought" Tremolada told Planetmountain "finding a new, logical and fun line isn't always easy but this one combines difficulties with a beautiful descent. It's easy to reach and it certainly deserves being repeated."

I don’t know how often I've skied the classic Mesdì valley, always looking at the countless couloirs and features on both sides… but this great line is completely hidden from view, you can only see it from the summit of Piz da Lech. Andrea summited this a few days ago and from there he checked the conditions through his binoculars: the time had come to give it a go!

Thursday was probably the best day of the week, immediately after Wednesday's snowfall and with perfect blue skies, but we chose to wait another day to give the snow time to settle and avoid skiing across the freshly sprinkled layer that might have covered the rocks.

Early on Friday morning we started skinning up Val Setus and Val de Tita towards the summit of Sass de Mesdì. We started our descent at 9.30 down perfect corn snow and were surprised by the line that proved less "forced" than we had initially imagined, including the short icy section on the upper part that we breached without having to take our skis off.

We only had to take our skis off once, on the lower section where we abseiled down a short vertical section before heading off down into Val Mesdì where the huge amounts of snow enabled us to ski all the way to the bridge and the Colfosco pistes. Another superb steep skiing day in this long season.

Andrea Oberbacher and Francesco Tremolada are members of Alta Badia Guides based in Corvara www.altabadiaguides.com
Thanks to Scarpa, K2 Skis and Haglöfs for the technical support