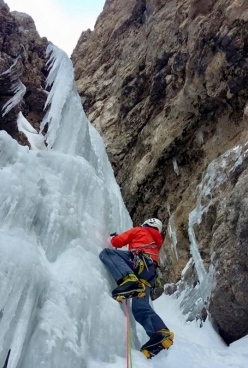 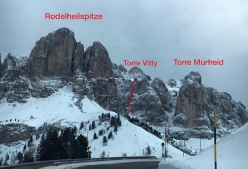 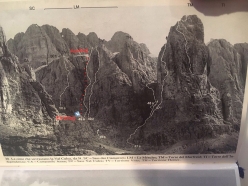 The icefall up Torre Vitty, Sella, Dolomites.The route takes a line to the left of the 1969 route established by via aperta nel 1969 Claudio Barbier and Heinz Steinkötter,
Photo by Simon Gietl, Andrea Oberbacher

Ice climbing in the Dolomites: an unknown ice climb, highly recommended by Simon Gietl and Andrea Oberbacher, up Torre Vitty in the Sella massif.

This report has been titled “unknown” because, despite our research, we failed unfortunately to find out who established this beautiful ice drip up the Vitty Tower in the Sella massif, Dolomites, prior to the ascent on 8 December by local mountain guides Simon Gietl and Andrea Oberbacher.

Gietl had noticed a thin line of ice a few days beforehand, high up between Sas dla Luesa / Rodelheilspitze and Torre Murfreid, and on Friday the duo made their way up through Val Culea with snowshoes. However, instead of following this classic ski mountaineering route to the summit, after about 300 meters they broke off to the right and then started the ascent with ice axes and crampons.

Gietl and Oberbacher followed a line to the left of the route established in summer 1969 by Claudio Barbier and Heinz Steinkötter. 8 pitches were climbed past difficulties up to M4 before finishing on the plateau and abseiling down the route.

This is obviously not a first ascent, also because others have climbed the route in the previous winters (such as Patrick Runggaldier in 2016 and Lukas Runggaldier in 2015), and Gietl and Oberbacher discovered an old sling at the base that could even date back to the ‘70s. At present no one knows who climbed the route first and when. Leaving this detail aside though, the route is undocumented and, according to Gietl and Oberbacher, "highly recommended. A beautiful ice climb that probably immediately disappears under a layer of snow in more abundant winters."