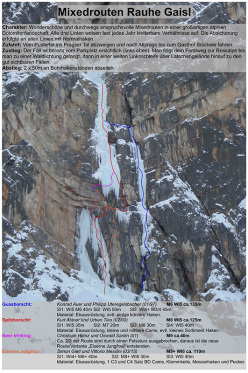 Rauhe Gaisl is a small, cold peak hidden above the Pragser Tal that hosts the demanding ice climb Guasborscht, put up in 1997 by Konrad Auer and Philipp Uteregelsbacher, while in 2001 Kurt Astner and Urban Ties climbed the evident line to the left, calling it Spitzborscht.

A year later Christoph Hainz and Oswald Santin added a direct variation to Spitzborscht, climbing straight through the series of roofs to add Beer trinking. At this point it seemed as if all the possible lines of ascent had been taken, that is, until this winter when at the start of March 2015 Vittorio Messini and Simon Gietl noticed that the mixed section of Beer Trinking no longer existed due to rockfall.

Messini and Gietl, who recently added a new mixed line up the North Face of Wasserkopf, decided to climb a thin crack to the right of the main drip and then reach the curtain of Spitzborscht via some demanding mixed climbing. The result is a great new variation called Eiserne Jungfrau, climbed free by both of them a few days later at M8+ WI6.

Thanks to: adidas, Austria Alpin, Salewa