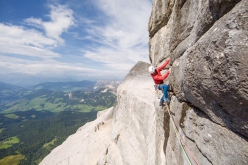 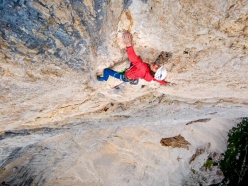 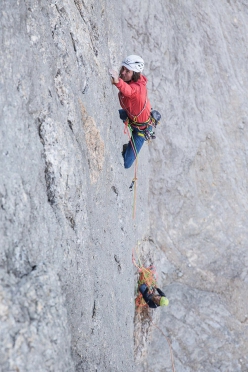 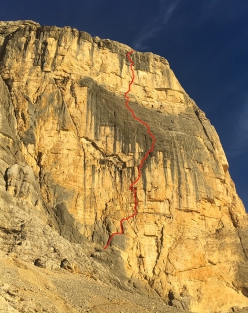 PORTFOLIO / gallery Portfolio: Stigmata added to Heiligkreuzkofel in the Dolomites by Simon Gietl and Andrea Oberbacher

Over a four-day period in August 2016 Simon Gietl and Andrea Oberbacher made the first ascent, ground-up, of Stigmata, a multi-pitch rock climb up Heiligkreuzkofel / Sass de la Crusc in the Dolomites freed by the duo on 17/07/2017 with difficulties up to X-.

"Great climbing, demanding, up good rock, at times excellent." This is the description of Stigmata, the climb established ground-up by Simon Gietl and Andrea Oberbacher to the left of the famous Livanos Pillar on Heiligkreuzkofel, the mountain that dominates Val Badia in the Italian Dolomites.

After having established Voodoo-Zauber  in 2015 up the righthand side of the iconic peak, the two mountain guides concentrated their efforts on the other side of "Sass de la Crusc". Beginning on 18 August 2016, they followed the first 20 meters of Chiodo Argento before leaving the crack and breaking off right towards the center of the face.

"We quickly realised that this project was as beautiful as it was serious." Gietl told planetmountain.com, adding "the ambient and atmosphere on the secluded section of the face was impressive. Peering upwards, we saw that the steepness, difficulty and compact nature of the face exceeded our wildest imagination."

After having established the first two pitches they called it a day and returned the next morning to establish the next six. The last four in particular offered "pure pleasure climbing" and led to an obvious ledge, where they abseiled off.

Four days later they returned to mountain, ready to bivy at the base of the wall if necessary to complete the line. The first pitch proved difficult right from the outset, so much so that only by precariously having off cliff-hooks in order to hammer in some pegs did Gietl manage to make upwards progress. 25 meters later the two rappelled for the last time and after having bivied at the base, on 24 August they completed the pitch and the rest of the route.

"While establishing this pitch I repeatedly asked myself whether I’d manage to free it" Gietl explained "the first ascent proved so testing, both physically and psychologically, that I almost threw in the towel. Every meter was complicated and tiring. When I finally reached the belay at the end of a really delicate section, I realised we’d just climbed something extraordinary."