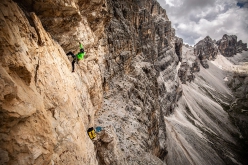 Simon Gietl making the first ascent, solo, of Can you hear me?, Cima Scotoni, Dolomites, in memory of Gerhard Fiegl.
Photo by Matteo Mocellin 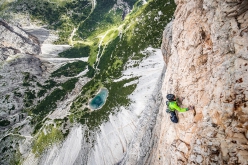 Simon Gietl climbing his Can you hear me?, Cima Scotoni, Dolomiti
Photo by Matteo Mocellin 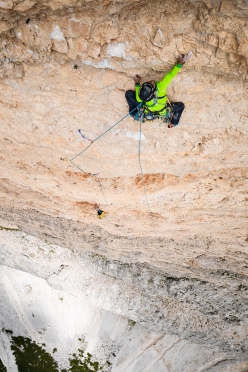 Simon Gietl making the first ascent, solo, of Can you hear me?, Cima Scotoni, Dolomites
Photo by Matteo Mocellin 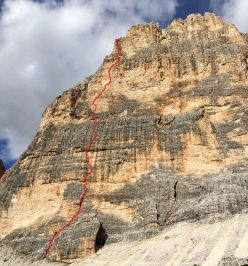 The South Tyrolean mountaineer Simon Gietl has made the first ascent, rope solo, of Can you hear me? up Cima Scotoni in the Italian Dolomites). The new climb has been dedicated to Gerhard Fiegl.

Climbing rope solo, at the end of June 2018 South Tyrolean alpinist Simon Gietl completed his new route up Cima Scotoni in the Dolomites. The 33-year-old spent 4 days establishing the climb in September 2016 and after another four days of climbing last summer, he topped out on 27 June 2018. The 550m, 27 pitch new route was established ground up, without bolts, using a combination of free climbing and aid climbing, past difficulties up to VIII+ A2. The line has been called "Can you hear me?" in memory of his friend Gerhard Fiegl, who perished in the Himalayas in 2017 and who first noted the line between Via Ivano Dibona and Zauberlehrling.

CAN YOU HEAR ME by Simon Gietl

I first met Gerry Fiegl during the 2009 Salewa athletes meeting, at the time he was a new addition to the team. We immediately got on like a house on fire, as if we’d known each other for ages! Subsequently we often climbed together across the Alps, but it wasn’t just his climbing skills that made me want to be with him, it was the combination of these honed skills with his friendly character, which always guaranteed we’d have some great days out!

In 2014 we decided to travel to Patagonia. A short 6-hour weather window was our only chance to attempt Fitz Roy and our plan therefore was to climb non-stop from the valley to the summit and back. Our chances of reaching the top in those conditions were low, but our motivation was boundless. To try something like this you need the perfect climbing partner, someone you can rely on 100%. Gerry was the man!

After 21 hours we reached the highest point of Fitz Roy, shook hands and were happy! We’d fought our way through some intense hours; rain, snow and strong winds had made life difficult, and yet we’d always been in high spirits, always had fun. For a brief moment up there on the summit we felt like heroes, immortal heroes. But unfortunately we are mere mortals.

Gerry died in a mountaineering accident on October 26, 2015 in Nepal. When I heard the news, I felt the ground disappear beneath my feet. I didn’t want to believe it, I simply couldn’t believe it!

In that instant I realised for the first time how close Gerry hand I had become, how much he meant to me as a human being. He was a good friend, someone with whom I could talk about everything! This is why it was so important for me to keep the promise I’d made to him before he set off on his expedition to Nepal. The idea of establishing a new climb in traditional style up Scotoni was his, and before departing he’d asked me if I wanted to climb it with him. He made me promise we’d climb it together! And I of course I did.

Unfortunately the twist of fate made things turn out differently, but one thing was obvious: since I’d promised I wouldn’t climb the route with anyone else, I’d have to climb it alone!

When I finally reached the summit of Cima Scotoni after 21 pitches I felt overwhelmed by a thousand different emotions. But although there wasn’t a soul in sight, I didn’t feel alone and I whispered: "THANKS Gerry" ... Can you hear me?

05.11.2015
Gerhard Fiegl perishes on Nilgiri South in the Himalaya
On 25 October Hansjörg Auer, Alexander Blümel and Gerhard Fiegl reached the summit of Nilgiri South, the difficult 6839m mountain in the Annapurna massif (Nepal), having climbed the virgin South Face. The day after summiting the Austrian expedition transformed into tragedy as 27-year-old Fiegl fell to his death while descending the SW Ridge.

04.07.2012
Agoge, new climb on Cima Scotoni by Gietl brothers in the Dolomites
On 26/06/2012 Simon Gietl and his brother Manuel completed Agoge (VIII/VIII+,400m), a new rock climbing up Cima Scotoni in the Italian Dolomites.