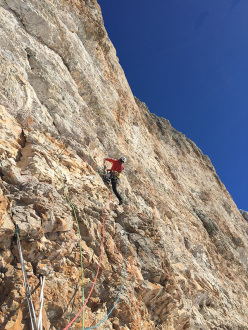 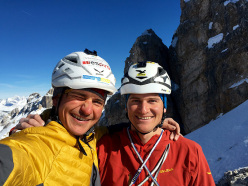 In mid-february 2015 Simon Gietl and Gerry Fiegl made the probable first winter ascent of Waffenlos on Cima Scotoni, Fanis, Dolomites.

Cima Scotoni climbing once again for South Tyrolean alpinist Simon Gietl. After the first winter ascent Zauberlehrling in 2012 and after the first ascent of Agoge that same year, taking advantage of the current amazing period of high pressure Gietl has now teamed up with Gerhard Fiegl to make a rare repeat and probable first winter ascent of Waffenlos, the 550m climb put up in 1993 on the mountain’s wall face by Helmut Gargitter and Claus Obrist.

Great weather had been forecast for the Carnival week across the Alps so my climbing partner Gerry Fiegl and I knew we wanted to head to Cima Scotoni in the Fanes group in the Dolomites where we’d planned to make a winter ascent of Waffenlos.

Ten days beforehand I’d made my way to San Cassiano in Alta Badia to take a photo of the West Face. There was still plenty of snow on the wall and so to postpone the ascent, hence the decision to climb it that Carnival week with Gerry, my partner during my January 2014 Patagonia expedition.

On February 17 we skinned up to the Scotoni refuge. Since it was pretty cold and we’d only planned to climb the first few pitches we were more than happy to have a rest in the warm hut and treated ourselves to some hot coffee. The next day we set off at 9:30am and about an hour later reached the base of the route.

Since I’d climbed the route back in 2007 together with my brother Manuel I could still remember the line perfectly. The warm sunshine had almost the same beneficial effects as the coffee earlier that morning back at the Soctoni hut. As planned we climbed the first pitch and it immediately became clear to us that we’d have to return the next day with bivy gear.

The next morning was, despite the more relaxed ascent up the fixed ropes, nevertheless exciting and anything but boring on the thin 6mm ropes. We soon reached the first ledge system where we stopped for a break. At 11:30 we continued the climb. The rock was loose in parts and difficult to protect, and this required the utmost concentration. Gerry fought his way up the loose 8th pitch, then I took over the lead. Since we we’d managed to climb everything free up to this point I was really motivated to climb the next crux pitch free, too. 20 minutes later and with exploding forearms I reached the belay, extremely happy to have not fallen. A mere 80 metros separated us from the second rock band.

We reached the ledge, the day’s objective, at 17. The last rays of sun indicated that the day was quickly coming to an end but nevertheless we decided to climb another pitch to make things easier for the next morning. Tired but happy we cooked a good meal and then curled up in our sleeping bags.

The next morning, after a night with temperatures down to -18°C, we started to move at around 9:00 clock. After a hearty breakfast of chocolate cereal we got back "work". The last few meters proved to be pure climbing bliss and at 11:30 we stood on the summit of the pillar.