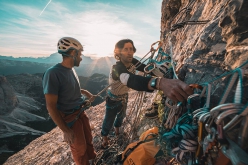 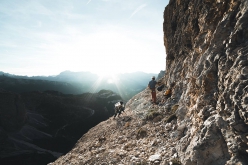 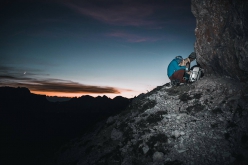 Seven years after the first reconnaissance of the immense SW Face of Cima Scotoni, Italy’s Nicola Tondini has now definitively completed his Dolomites masterpiece, Non abbiate paura di sognare. With difficulties up to X (8b) max and obligatory IX- (7b+) this checks in as one of the most difficult multi-pitch climbs in the Dolomites.

Tondini had established the 700m outing in several stages, adopting a rigid approach which included climbing ground-up only and eschewing aid to progress upwards. After having freed all the pitches individually in 2017, the missing link was a single push free ascent. I.e. climbing all pitches free without ever returning to the base of the mountain.

Accompanied by his Verona-based XMountain guide colleague Lorenzo d'Addario, on Tuesday and Wednesday Tondini completed the difficult redpoint, bivouacking at the ledge and requiring 22 hours of climbing spread out over two days.