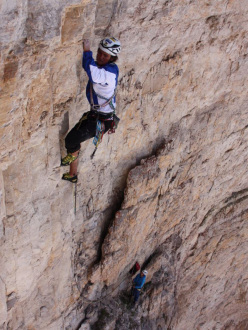 Agoge, new climb on Cima Scotoni by Gietl brothers in the Dolomites

On 26/06/2012 Simon Gietl and his brother Manuel completed Agoge (VIII/VIII+,400m), a new rock climbing up Cima Scotoni in the Italian Dolomites.

The two South Tyrolean alpinists chose a line which starts 50m to the right of the famous Via Lacedelli, the great classic up this immense wall and one of the outings in the Dolomites, established in 1952 by Lino Lacedelli, Luigi Ghedina and Guido Lorenzi. The new route put up by the Gietl brothers breaches the section of yellow rock and crosses Via Fachiri where tis traverses left for 60m.

Gietl explained to Planetmountain "The route climbs good rock up an interesting mix of cracks, slabs and overhangs. Only in three sections is the rock slightly friable, namely on the three crux pitches. Due to the bad weather we established the route after a series of attempts in May and June. Apart from the few in-situ pegs, the route needs protecting with trad gear. All things considered Agoge is a beautiful route but to climb it you need a good dose of courage, determination and route-finding skills to climb the long sections which don't have pegs."