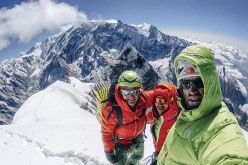 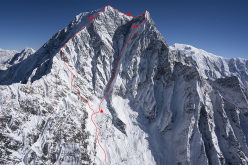 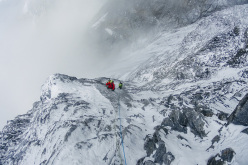 Gerhard Fiegl perishes on Nilgiri South in the Himalaya

On 25 October Hansjörg Auer, Alexander Blümel and Gerhard Fiegl reached the summit of Nilgiri South, the difficult 6839m mountain in the Annapurna massif (Nepal), having climbed the virgin South Face. The day after summiting the Austrian expedition transformed into tragedy as 27-year-old Fiegl fell to his death while descending the SW Ridge.

What we are about to recount is a story of alpinism. An alpinism that, as has already occurred in the past, unfortunately mixes a beautiful and difficult ascent with a drama. That combines success with tragedy. This is what happened to Hansjörg Auer, Alexander Blümel and to Gerhard Fiegl on the virgin south Face of Nilgiri South, a coveted 6839m summit situated in the Annapurna massif in Nepal’s Himalaya. The Nilgiri group is composed of three distinct summits: Nilgiri North (7061m), Nilgiri Central (6940m) and Nilgiri South (6839m). The South summit had only been climbed once before, in 1978, while its complex and vertical 1500m South Face had resisted all previous attempts. In short, a "first" and an ambitious project, one of those that, as one says in alpinism, aims to resolve a "problem". Which, at the end of the day, is what alpinism is all about. Auer (31), Blümel (28) and Fiegl (27) were sufficiently capable of attempting it and succeeding. Those who follow the chronicles of mountaineering know that these are three of the best Tirolese alpinists, which translates into three of the world’s best and most prepared. They were joined by Elias Holzknecht, an expert alpinist and photographer.

It all began on 5 October with their departure from Austria. After the approach trek and the classic acclimatization period at altitude the moment came to tackle the South Face. It was 22 October when the trio set off on their first attempt. Ahead of them lay a difficult and unknown task: 1500m of mixed rock and ice baring the way up the South Face of Nilgiri South. They wanted to climb it in a single push, from the base to the summit, in the purest alpine style. Right from the outset the ascent proved a battle as they breached difficulties up to M5 and 90° ice. They fought and continued upwards, battling not only against the technical difficulties but also against the wind and cold. After two bivouacs and three days on the face, after having reached the top of Nilgiri Spire, descended its north ridge and then ascended the SW Ridge, the yearned-for moment finally came: at 11am on 25 October they reached the summit. The trio were tired and exhausted, but this was the moment for joy, to celebrate the great success. A liberation that made them forget all the previous hardship and tension. But this joy was over in an instant. Auer and Blümel noticed that Fiegl was unwell. Immediately things turned difficult. And joy transformed into drama. They had to descend, and fast!

They knew that the line of ascent was too difficult and dangerous to descend, so they immediately began to climb down the unknown but less steep SW Ridge. Fiegl’s condition rapidly worsened though and they were forced to bivouac a few hundred meters below the summit. Their third bivy on the mountain. In the meantime, back in basecamp Elias Holzknecht attempted to organize a helicopter rescue, but this proved impossible due to the poor weather and altitude.

Dawn broke on 26 October. After the bivouac Fiegl’s condition seemed to have improved slightly. It was freezing cold and the winds were extremely strong. But they had to lose height as quickly as possible. This was the only way to help Fiegl. It was a race against time. The three continued to descend with difficulty down the SW Ridge of Nilgiri South when, at around 14:00 on 26 October, the irreparable happened. Gerhard Fiegl lost his balance and, watched by his helpless partners, fell circa 800m into the void. Utterly devastated by the demands of the complicated descent and by 4 days on the mountain, deeply shocked by what had happened to their friend, Auer and Blümel were faced with a single choice: find the power to continue downwards. Completely exhausted and shocked they reached the base of the mountain and their salvation at around 18:00.

Immediately the team arranged a search and rescue mission, but due to the poor weather and strong snowfall the helicopter managed to take off only two days later… of Fiegl there was no sign. The news of the unexpected death of one of Tyrol’s most promising young alpinists struck right at the heart of the tight-knit Austrian mountaineering community and the mountaineering world.

How does one walk away from tragedies like these? No one can tell. What remains is the drama for the families. But also for those who returned home alive. Anguish, too. And memories. "When an good friend falls and dies in front of you, that's when everything else loses its importance. Our expedition could not have ended worse. We are all very sad." stated Hansjörg Auer said. "I am very saddened by the loss of our friend" added Alexander Blümel "But no one can take away the memories of the intense moments I shared with Gerry."

Nilgiri South was first climbed on 10 October 1978 via the East Ridge by a Japanese expedition led by Kazao Mitsui. The formidable South Face and SW Ridge had been attempted unsuccessfully on various occasions by Japanese, Czech and Slovene expeditions and the new Austrian route, climbed with three bivouacs during the ascent and one during the descent with difficulties up to M5 90° ice, is only the second ascent of Nilgiri South. It is probably one of the most important Himalayan ascents this season, unfortunately though overshadowed by the tragic loss of Fiegl in descent.