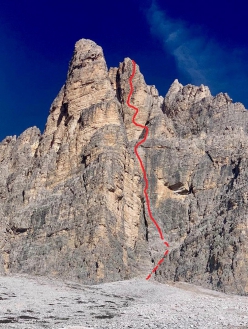 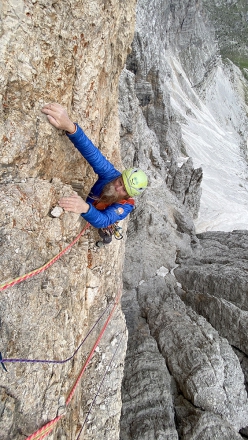 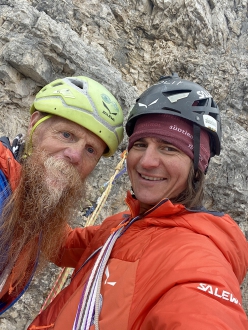 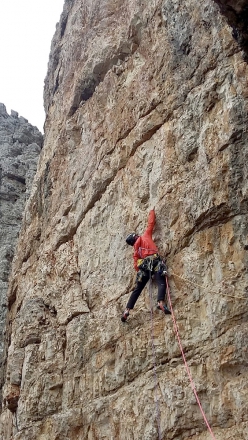 The two mountain guides Simon Gietl and Andrea Oberbacher have made the first ascent of DNA, a new multi-pitch rock climb up Croda degli Alpini, the foresummit of Cima Ovest in the Tre Cime di Lavaredo group of the Italian Dolomites.

On 21 June 2020 Italian alpinists Simon Gietl and Andrea Oberbacher joined forces once again to establish a new route, onsight and in just a single day, up Croda degli Alpini, the sunny foresummit of Cima Ovest di Lavaredo in the Tre Cime di Lavaredo group of the Dolomites.

The two mountain guides followed a line to the right of the route established up the face known as Mulo, by Hannes Pfeifhofer and Dietmar Niederbrunner in 2018. Seven long pitches with difficulties up to VII+ led them to the top of Croda degli Alpini, from where they descended via the mountain’s Normal Route. All pegs placed at the belays were left in-situ, while they protected the climbing on the pitches with wires, cams and threads only.

"The climb is located above the Auronzo hut, on a yellow wall that had always caught my attention. However, given the vicinity to refuge and the path immediately below, in the past I never considered trying it because the rock is a little bit loose. At present though there aren’t that many people about. The time had come to see why this piece of rock had always fascinated me" Gietl told planetmountain.com.

"On the whole it’s a pretty nice route, ideal for those who already have plenty of experience climbing alpine multi-pitches. We thought we’d need two days, instead we completed the route in a day. The fact that we set off in the morning and returned in the evening felt special, also because we managed to do so in the best style possible: onsight. The new route is called DNA "because if you think about it, here at the Tre Cime di Lavaredo, here in the Dolomites, this is where it all started."

For the record having needed just one day for the first ascent meant that there was time left for something else. "Maybe it's because I'm better at climbing new routes than reading existing topos" Gietl laughed, "but the next day we moved on to establish something new..." Stay tuned.