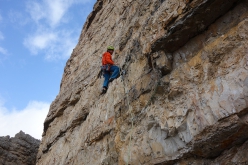 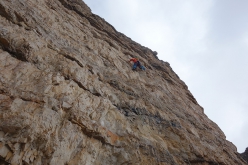 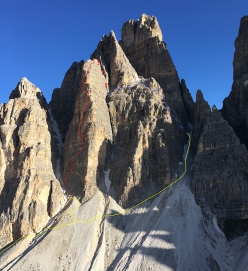 The line of the new climb up Mulo, the pre-summit of Cima Ovest di Lavaredo, established by Hannes Pfeifhofer and Dietmar Niederbrunner
Photo by Pfeifhofer, Niederbrunner.

After establishing Petri Heil up the north face of Cima Ovest at the Tre Cime di Lavaredo in the Dolomites in 2016, Hannes Pfeifhofer and Dietmar Niederbrunner turned their attention to the opposite side of the mountain and have now completed a new route up the sunny south face. The new route currently has no name but leads up Mulo, the fore summit of Cima Ovest, and was forged between 2017 and 2018 to the right of the rarely repeated via Comici. Somewhat surprisingly, given how popular the Lavaredo massif is, the new route does not cross any existing climbs.

"The route has a rather classic feel to it", Pfeifhofer told planetmountain.com "the pitches are fairly well protected with normal pegs but need backing up with friends and threads, while the belays are equipped with bolts. The difficulties are not extreme, and on the most difficult section the pegs are close together and and you can aid climb A0. I consider it a good alternative when the weather is not the best: it can be reached in just 15 minutes from Rifugio Auronzo, the face doesn’t get wet easily and in any case after the rain it dries quickly, and thanks to its position it’s also protected from the wind. Moreover, if you need to you don’t have to climb to the summit to descend but you can abseil down the route."