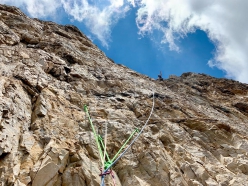 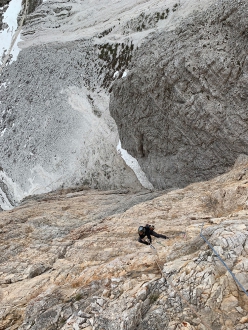 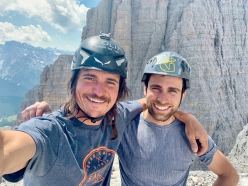 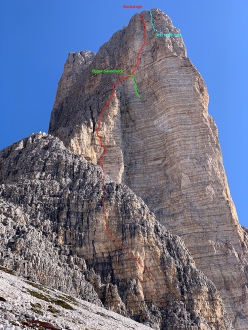 In spring 2019 Simon Gietl and Vittorio Messini made the first ascent of Backstage, a 350m multi-pitch with difficulties up to VIII+/R3 on the south face of Kleine Zinne / Cima Piccola, Tre Cime di Lavaredo, Dolomites. Messini reports.

When we took a few photos and shot some video for our North 3 project on Kleine Zinne, we often stopped on the way down to examine all the lines that run up the south face. The extreme classics such as Gelbe Mauer, Ötzi trifft Yeti and many others are lined up one after the other on the righthand side. But if you look further left, where the ​​Egger-Sauschek route lies, there are far fewer routes. The south face comes to an end with a reputedly wild route established by Andi Orgler and, further to the right, a route put up by Frank Knez. But what about the steep roofs on the left? Of course we had to take a closer look ;-)

We couldn't wait until the snow had completely melted and drove up to the Aurozo hut with skidoos and then skinned up to check it out. Close inspection didn’t reveal any traces. We needed a second day in early spring to breach the steepest section of the wall, at times on loose rock, other times on good quality dolomite. After guiding for a few days we finally managed the first free ascent. This new adventure is located not in the foreground as seen from the panoramic Paternsattel col - the classic Japanese viewpoint - but on the sunny south face of the Cima Piccola. Backstage!