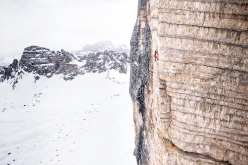 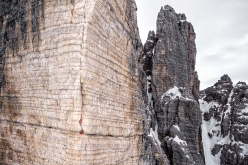 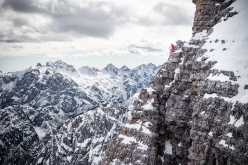 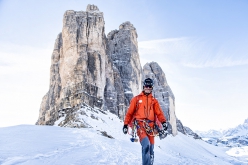 As reported previously, over a two-day period towards the end of February 35-year-old South Tyrolean mountaineer Simon Gietl completed the famous Tre Cime di Lavaredo skyline on his own, enchaining with just one bivouac Cima Ovest, Cima Grande, Cima Piccola, Punta di Frida and Cima Piccolissima. The idea of this winter solo traverse had sprung to mind after the first winter enchainment of these five iconic peaks in 2017 with Germany’s Michi Wohlleben, but in the years that followed he wasn’t, as he himself admits, "sufficiently mature" for an undertaking of this magnitude. Here are the details.

First off Simon: how come alone?

I simply needed some time for myself. Then of course the thought has been playing in the back of my mind ever since I did the first winter enchainment with Michi Wohlleben in 2017. Initially I ignored the idea, but gradually it began to take on form

Until just the other day
Yes. I’d actually wanted to try it during the last few winter seasons, but for various reasons it never worked out. Now the opportunity arrived: the temperatures were good for a climb of this sort and no snow or rain was forecast. Having said that, they’d predicted strong winds, up to 60km/h on Saturday and 80km/h on Sunday, with the strongest gusts blowin from Sunday night to Monday morning. The winds were forecast to die down on Tuesday, while snow was expected on Wednesday.

Were you worried?
About the wind? Very. I have a friend who works as a meteorologist and he explained to me that nowadays the weather forecasts are extremely precise, especially concerning winds. I decided therefore to go up to the Drei Zinnen on Saturday and see what it was like up there. And I saw that it might work. Deciding to start is always the most difficult thing, but I wanted to take advantage of these warm temperatures, it seemed ideal and I obviously didn't know if I’d get another weather window. A few days earlier I’d also refused an invitation from Vittorio Messini to try a new route together, I was already too concentrated on this project. So I had to give it a go.

Did you follow the same routes as those you climbed in 2017?
The exact same ones. This linkup is, in my opinion, the most beautiful and logical way across the massif.

When did you leave?
At 5am on Sunday morning I met Matteo Mocellin and Alex Faedda at Lake Misurina. They’d come to do some filming and we went up to the Auronzo hut together, but then I continued on alone. They had loads of gear while my backpack was pretty light and I was in a hurry. I started climbing at 7:30am

How did it feel?
Great! I felt like I was in the right place at the right time. I was happy, I was where I belonged and at 14:00 I reached the summit of Cima Ovest.

At 14:00? Last time you’d needed just two hours to climb this mountain!
Yes, but don’t forget I was also almost four years younger! Seriously though, I was slower because I self-belayed almost all the hard pitches. I climbed up, then hauled my backpack and gear. This obviously takes time. I only climbed without a rope on the easy pitches at the start and the end of the route.

Were you on schedule?
I’d say so, yes, actually I was even a little faster than I thought I’d be. I was happy because initially I’d planned on completing the enchainment in three days, with two bivouacs, the first between Cima Ovest and Cima Grande, the second between Punta di Frida and Cima Piccolissima.

But you ended up doing it with just one bivouac
Yes, I descended Cima Ovest quickly and at 16:00 I decided to make the most of the remaining daylight, also because it was a lot warmer than it would have been the next morning. So I started climbing up Via Dülfer and fixed 120 meters with two ropes, with my single rope and with a 5 mm tagline before turning on my headlamp and abseiling down into dark.

A 5mm tagline!
Yes, it’s really thin, I know. And the higher you climb, the thinner it seems to become! It works, though I wouldn’t really define it as being textbook.

Was it windy?
On Saturday it was windy but if I wasn’t climbing on the arête proper, it was OK. When I was out on the exposed arête though I felt the full brunt of the strong wind, both in terms of intensity and cold. Matteo managed to fly his drone on Saturday but it was really touch and go, on Sunday though the gusts were far too strong.

Before we get to Sunday: you bivied in the gully between Cima Ovest and Cima Grande
I’d stashed some stuff there on Saturday, a sleeping bag, a mattress, a stove and some food, so I had everything I needed. Then I thought that maybe I could complete the enchainment in just two days instead of three, and in the end that's what I did. It was a windy night. I woke up the following morning and was alarmed to see that it had started to snow ever so slightly. I got up quickly and warmed up by jugging up the fixed ropes.

It's vertical there, isn’t it?
Yes, grade V+, a beautiful steep corner! I reached my highpoint from the night before, then made quick progress. Some sections were covered in a thin layer of ice but at 9:20 I reached the top of Cima Grande.

Speaking of ice, what other gear did you have?
I had two very light crampons and just one ice axe. I climbed in boots that are a combination of climbing shoes and mountaineering boots. They are 20 years old but for this type of climbing they still work perfectly!

So there you were, at 9:20am on Cima Grande
I was really satisfied, I was doing well. I had a light duvet jacked and an emergency bivy bag, just in case. I descended the normal route and then climbed Cima Piccola via the normal route. I reached the summit at 11:45 am. Then I descend down the north face via the Innerkofler route and climbed Punta di Frida. I didn't even stop on its summit, I simply crossed it and started the descent. I knew that although I’d done a lot, I still had a lot to do.

Explain
The gully between Punta di Frida and Cima Piccolissima is one of the wildest corners of the Tre Cime. Hardly anyone ever comes here and you feel very, very lonely. I was also worried that my rope might get stuck, but I was lucky.

Matteo and Alex were nearby
When you climb without a rope it doesn't matter if someone is close to you or far away, the result is always the same. Although they were in the vicinity, I never really felt as if they were around. I wanted to be alone, even at the bivouac although if it would have been cool to take some photos there. No, this was my moment.

You mentioned luck. One always needs a pinch of good luck.
And I was mega lucky! Everything ran smoothly. Interestingly I never got the feeling that it wasn't going to be my day. Quite the opposite, I felt that those were my days, that everything was turing out exactly as planned

Were you having fun?
Honestly? Not so much on the last two peaks, no. I realised that I was slowing down, that I was becoming tired, and I made an extra special effort to be very careful. The mountains don’t care if you’re on a grade X or grade IV terrain, if you’re soloing like I was, the outcome is always the same. So I tried to examine every hold, every foothold, twice before using them, and not let my fatigue make me careless. Then all of a sudden I was on Cima Piccolissima and tears streamed down my face. I was overwhelmed with emotion. I’d rarely felt such joy when reaching a summit. I was content, happy to have been able to experience this adventure. After that I descended, at 15:00 I reached the col. It had been a long journey.

Simon, you mentioned earlier that you would have liked to try this enchainment earlier
I don't know if I’d have succeeded, it’s difficult to say. I've been in the mountains a lot since then, and making the first ascent of Can you hear me? on Cima Scotoni in particular it was a breakthrough moment. I realised that if I could do that climb on my own, then I’d probably succeed here, too.

In December you had made another important ascent, Pandora on the Pordoi with Vittorio Messini
Indeed. I told my wife that I’d started this winter with Pandora and now I’ve finished it with Tre Cime. They are two very important ascents, which I try not to compare against each other. I feel that when you compare climbs, you always end up reducing things, you take something away. There’s no need to do this, especially when the climbs are as beautiful as these ones!

At the start of this interview you told us that you’d wanted to be on your own for a bit
I obviously feel the need to take to the mountains, but the older I get, the more this climbing upwards is actually a delving deeper into myself. Through the mountain I get to know myself better, as a person, who I am, with all my strengths, fears and weaknesses. And I’ve come to the conclusion that I’m happy with who I am.