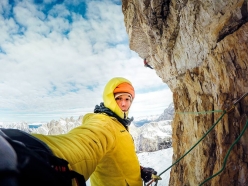 Michi Wohlleben photographs himself and Simon Gietl on the crux pitch of Spigolo Scoiattoli during the winter traverse of the Tre Cime di Lavaredo on 17/03/2017
Photo by archivo Gietl, Wohlleben 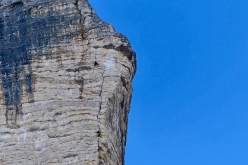 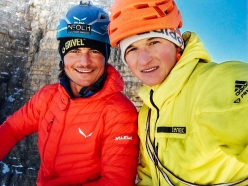 Simon Gietl and Michi Wohlleben on Cima Piccolissima during the winter traverse of the Tre Cime di Lavaredo on 17/03/2017
Photo by archivo Gietl, Wohlleben 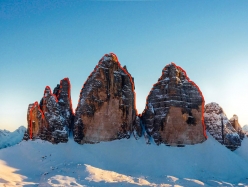 Winter mountaineering: on 17/03/2017 the alpinists Simon Gietl and Michi Wohlleben completed the traverse of the Tre Cime di Lavaredo - Drei Zinnen - in the Dolomites, climbing Cima Ovest, Cima Grande, Cima Piccola, Punta di Frida and Cima Piccolissima in 9 hours 15 minutes. This is certainly the first time the enchainment is carried out in winter.

It was, in some respects, foreseeable. After the first winter traverse of the three highest summits of the Tre Cime di Lavaredo in 2012 and after the winter trilogy of the North Faces of Cima Grande, Cima Ovest and Cima Piccola, the next logical step was to link not "merely" these three mountains but all five that make up the famous Lavaredo skyline. This meant adding Punta Frida and Cima Piccolissima, the tower known as Preußturm in German.

South Tyrol’s Simon Gietl and Germany’s Michi Wohlleben set of early on Friday 17 March 2017 and ascended with their ebikes to Rifugio Auronzo, below one of the most famous symbols of the Dolomites. The two mountain guides obviously know the Drei Zinnen extremely well, and are also familiar with the demands of enchaining these peaks. In 2012 Simon Gietl and Roger Schäli had spent two days making the first winter traverse Cima Ovest, Cima Grande and Cima Piccola, while in March 2014 Wohlleben teamed up with Ueli Steck to make the first winter trilogy of the premier north faces. Furthermore, in December 2016 Gietl and Vittorio Messini followed in the footsteps of Christoph Hainz and Simon Kehrer and repeated the winter trilogy in just 5 hours and 45 minutes.

So last Friday, just before the end of winter, Gietl and Wohlleben set off on the complete five-peak enchainment. The ascent times were impressive: start at 06:45 below Cima Ovest (2973m), climbed in just 2 hours 25 minutes via Spigolo Scoiattoli. The descent was made down the normal route, and subsequently the highest point of Cima Grande (2999m) was reached at 11:26 by ascending via Dülfer. After descending down the normal route - made somewhat easier thanks to a trail beat by other climbers - Gietl and Wohlleben reached the top of Cima Piccola (2857m) at 13:20 via the normal route. They swiftly descended down via Innerkofler and set their sights on the last two peaks: Punta di Frida (2792m) via its western ridge route and, after abseiling down the East ridge, Cima Piccolissima (2700m) which was summited at 14:50. Adventures don’t finish on the top but with feet firmly on the ground and after having rappelled down Preußriss the alpinists glanced at their watches. Total time: 9 hours and 15 minutes.

"From what I know this is the first enchainment of all five summits" Gietl told planetmountain.com, adding "but ours is certainly the first in winter." As to how this complete enchainment can be compared to his recent trilogy up the North Faces, Gietl replied "It was simply a very different alpinism. This ascent was a beautiful, long climb in the mountains but since it snowed not even ten days ago, conditions this time round were considerably more wintery, in particular on the descents."