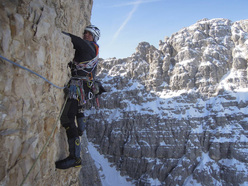 The line chosen by Simon Gietl and Roger Schäli for the first winter traverse of the Tre Cime di Lavaredo, Dolomites carried out on 15-16/03/2012.
Photo by archivio Simon Gietl

From 15 - 16 March 2012 Simon Gietl and Roger Schäli carried out the first winter traverse of the Tre Cime di Lavaredo in the Dolomites. The report by Simon Gietl.

"I'd had this project in mind for the last three years. And when last summer I took a client up all three summits of the Tre Cime di Lavaredo via the normal routes up the south faces, I promised myself I'd climb them in winter, but up different route.

My idea was to traverse from right to left, beginning with Cima Ovest, moving on to Cima Grande and finishing off with Cima Piccola. I talked to a colleague of mine with whom I've climbed a lot in the past, Roger Schäli from Switzerland, and he was immediately taken in by the idea.

We started on Cima Ovest, up the steep arête taken by Via degli Scoiattoli and, with the use of aid, we reached the summit in the afternoon. We lost little time and quickly descended down the South Face to reach Cima Grande, where we set off up Via Dülfer on the West Face. Night set in as we reached the ledge just below the summit and we bivied beneath the marvellous starry sky. The next morning we climbed up the final meters to set foot on the highest point of Cima Grande, then descended down its South Face to reach the West Face of Cima Piccola where, two hours later via the line usually used for the abseil piste, we reached the summit for the third time.

It may seem trite, but we were really happy to have reached all three summits. Setting foot on them certainly wasn't something we took for granted, especially since the final scrambles were covered in snow and often more demanding than the rock climbing on the faces below. But it was worth it. For us the summit remains an integral part of any ascent."