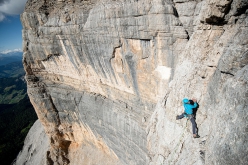 Simon Messner climbing the last pitch of Sinnfresser on Heiligkreuzkofel in the Dolomites in 2020, first ascended with and Philipp Prünster
Photo by Matteo Mocellin / Storyteller-Labs 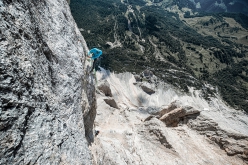 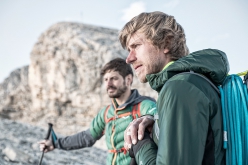 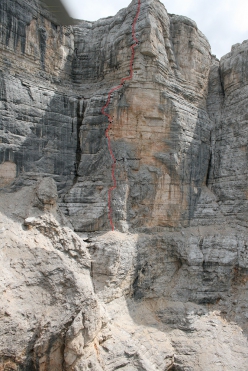 Sinnfresser on Heiligkreuzkofel in the Dolomites, first ascended by Simon Messner and Philipp Prünster
Photo by Matteo Mocellin

Simon Messner and Philipp Prünster have made the first ascent of Sinnfresser, a new multi-pitch rock climb on Heiligkreuzkofel / Sass de la Crusc in the Dolomites.

In 2016 Simon Messner and Philipp Prünster ventured onto Heiligkreuzkofel, aka Sass dla Crusc to explore a section to the left of the central section of the famous Mittelpfeiler pillar. The pair climbed the first two pitches, tackling somewhat loose rock before stumbling across three pegs and two bolts. There was no sign of previous activity above the second belay however and Prünster managed to establish a third pitch that led them to the large ledge. Pitch 3 proved taxing both physically and mentally as it was practically unprotected, and after this grueling fight they decided to exit the face via the Mephisto route, content that nothing had happened to them.

The two promised each other that they would never return but four years down the line, in summer 2020, they scrambled up once again above Val Badia to complete unfinished business. Messner and Prünster managed to "soften" the dangerous third pitch by breaking out to the left, and this pitch now no longer features the crux, as long as you don't follow the original 2016 line; the most difficult pitch is now pitch four just above the ledge (VIII), while a spectacular fifth pitch leads more easily to the top. After the first ascent, the pair returned on 28 June 2021 to make the first free ascent of what they have called Sinnfresser.

To date it is still not entirely clear who started the first pitch and when, but Messner and Prünster assume they probably came across a abandoned attempt that involved a rescue, given the type of the last bolt. Since the two bolts were already placed by unkonwn climbers before them, Messner and Prünster decided to use them. Repeat ascensionists can choose whether to use them or not.