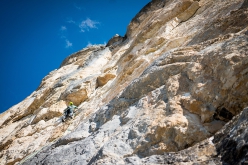 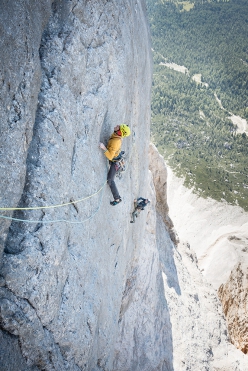 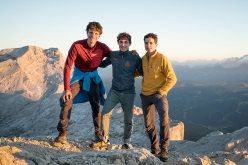 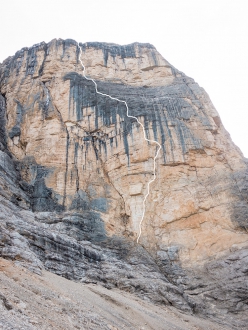 Martin Dejori, Titus Prinoth and Alex Walpoth have established Xylophon, a new multi-pitch rock climb on Heiligkreuzkofel above Val Badia in the Italian Dolomites. The route tackles a line on the the impressive west face of Piz dl' Ciaval, to the left of the famous Livanos Pillar first ascended in 1953 by Georges Livanos and Robert Gabriel and to the right of Stigmata, first ascended by Simon Gietl and Andrea Oberbacher in August 2016, before crossing the latter at about half-height.

Dejori, Prinoth and Walpoth actually started their route in August 2016. Having noticed a rucksack full of climbing gear at the base of their intended line, they scrutinised the face but after failing to find any signs of an attempt they ventured up into the chossy yellow rock and established 2 pitches before rappelling and bivying at the base. Despite the bitter cold the next morning they managed to establish a further half pitch, but were then forced to retreat.   Unbeknown to the trio, a few days later Gietl and Oberbacher returned to the mysterious stashed rucksack and established the extremely difficult Stigmata.

After the initial disappointment, Dejori, Prinoth and Walpoth returned this summer intent on completing unfinished business. On 5 September they quickly reached their highpoint and completed pitch 3 which shares the belay with Stigmata, and then crossed this to take a leftwards trending line up excellent rock to the summit. Having hauled their bivy gear all day they decided to spend the night on the summit and then descended on foot the next day. The new 240m 7-pitch outing breaches difficulties up to VIII+ A0 and is called Xylophon because, according to Walpoth "the first letter indicates the lines of our route and that of Gietl, and because it sounds similar to the other wild routes on Heiligkreuzkofel."

14.08.2009
Dolomites climbing: Hansjörg Auer frees Silberschrei on Sass de la Crusc and on-sights La Cattedrale in Marmolada together with Much Mayr
An intense couple of months for Hansjörg Auer: together with Thomas Schreiber he recently carried out the first ascent of Silberschrei on Sass de la Crusc in the Dolomites, before a lightening fast trip to England with Much Mayr which resulted in a fast ascent of Gaia. The two then on-sighted La Cattedrale on the Marmolada in the Dolomites.