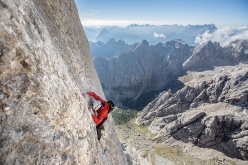 Hansjörg Auer starts 08/08/2016 be climbing in free solo the Vinatzer / Messner route on the South Face of the Marmolada.
Photo by Matteo ​Mocellin 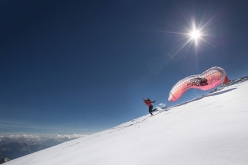 Hansjörg Auer taking off from the Marmolada Punta Rocca Summit. He landed on the ski slope above Canazei
Photo by Matteo ​Mocellin 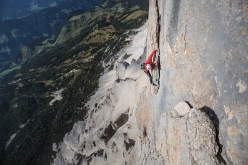 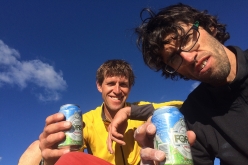 Hansjörg Auer with his brother Matthias Auer on the summit of Sass dla Crusc, Dolomites
Photo by Matteo ​Mocellin

The video of Hansjörg Auer who on 8 August 2016 in the Dolomites climbed free solo the routes Vinatzer - Messner up Marmolada, Abramkante up Piz Ciavazes and Große Mauer up Sass dla Crusc / Heiligkreuzkofel. The Austrian flew by paraglider from one mountain to the next and required 12 hours in total.

Vinatzer / Messner (800m, VI+) up the South Face of the Marmolada, Abramkante (500m, VII-) up Piz Ciavazes and Große Mauer (300m, VII-) up the West Face of Sass dla Crusc, also referred to as Heiligkreuzkofel in German. 12 hours in total, circa 33 kilometres covered, 3600 vertical height gain and loss of which 1600 meters climbing. Climbing free solo, that particular form of climbing that shouldn’t be imitated... These are the stats of the decidedly different day that Hansjörg Auer experienced on 8 August 2016 in the Dolomites, after having bivied in a cave below the South Face of Marmolada with his brother Matthias.

The Austrian is certainly no newcomer to undertakings of this sort (it’s worth remembering his free solo of Tempi Moderni in 2006 and Via attraverso il Pesce / The Fish route in 2007 and Mephisto on Sass de la Crusc in 2015), and this time in order to enchain one mountain with the next he shouldered a lightweight paraglider on his climbs.

Although light, the weight of the paraglider certainly made itself felt, especially towards the end. "I wanted to be fast" Auer told planetmountain.com "also because I had no idea how far I’d manage to fly. In he end strong winds didn’t allow me to get any further than Corvara. Keeping concentrated on the long approach to Große Mauer proved difficult and when I finally reached the route I knew that I had already crossed my usual limit."

His physical or psychological limit, we asked the 33-year-old. "Both. It was a combination of being tired physically, and then finding Große Mauer to be more intense than I had imagined. Suddenly the crux pitch no longer felt easy and while climbing the famous flake traverse I yearned for the end of the route." At the top of the climb Auer was greeted by his brother Matthias.

For the record, the other day Hansjörg Auer teamed up with Belgium’s Siebe Vanhee to make a rare repeat of Andromeda (7c/+), the route first ascended without bolts to the right of the Fish route on the South Face of the Marmolada by Maurizio Giordani and Rossana Mandrini in 1989, and freed by Auer's childhood idol and climbing instructor Roland Mittersteiner and Helmut Kritzinger in 1991. Auer commented: "congrats to Maurizio Giordani for opening the line 30 years ago by using around 25 pitons only. And it’s crazy to think how good Mittersteiner was climbing in those years…"

09.09.2015
Hansjörg Auer free solos Mephisto on Sass de la Crusc in the Dolomites
On 26 August 2015 the Austrian alpinist Hansjörg Auer made a free solo climb of Mephisto, the route established in 1979 by Reinhard Schiestl and Luggi Rieser on Sass de Crusc in the Dolomites
14.07.2006
Hansjörg Auer solos Marmolada's Tempi Moderni
On 11 June 2006 the Austrian Hansjörg Auer made a rare solo repeat of one of the most classic routes in the Dolomites, the 850m Tempi Moderni situated on the south face of the Marmolada, Dolomites.
20.12.2005
Manfred Stuffer's Dolomites summer
Manfred Stuffer spent last summer amassing a series of hard ascents, solos and enchainements, including "Costantini-Apollonio" (6c+), "Costantini-Ghedina" and 1° Spigolo Tofana di Rozes in 5 hours 30 minutes.