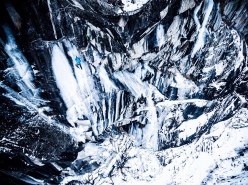 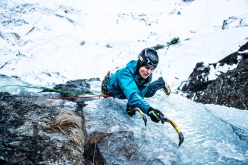 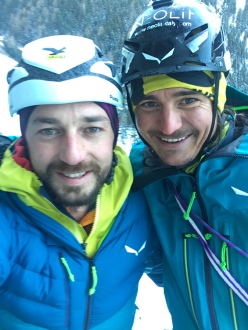 South Tyrolean alpinists Simon Gietl and Patrick Seiwald have made the first ascent of Räuber Hotzenplotz (M9 Wi5). This mixed climb is located to the left of the famous Koflerbach icefall close to Sand in Taufers in the South Tyrol, Italy.

I’d already noticed this beautiful line up ice and rock in 2009, and back then I teamed up with Patrick Seiwald and had tried to follow the logical and natural line. Our intention was to climb the way without bolts. The first pitches up pure ice did not cause us big problems, but on the third pitch the climbing became delicate. Complicated sections of ice alternated with difficult moves across rock. Nevertheless we managed to remain true to our ideal and, just like in a fairy tales, all of a sudden the difficulties disappeared.

When we reached the belay however, we realised that I the hardest bit still lay in store. The steep overhang promised to be the grand finale. A smooth and tiring corner indicated the logical way forward, yet we needed a good eye to figure out where to drive in some pegs in this compact rock. A few meters before the end of the roof we ran out of energy just as the day came to an end, and so we decided to retreat and complete the route at a later date. However, this “later date" had to wait almost 8 years.

During this long pause we passed below the wall on countless occasions and every time we eyed the line we had started in 2009. But it never formed in such a logical and climbable way as back then.

After the first ascent of Utopia I noticed that our drip had formed, so we immediately took advantage and returned on 22 December. The long wait was worth it. The route was in perfect condition and we were able to complete our project, waking it up from its deep winter sleep.

We also returned on 26 December rotpunkt, the first free ascent. Four hours later we shook hands happily, and later that evening we toasted to the new climb. There could have been no better way to end the year. We’d like to take this opportunity to wish everyone a happy new year :-)

NB Thomas Bubendorfer and Max Sparber carried out the first repeat on 05/01/2019.