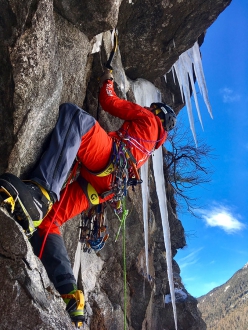 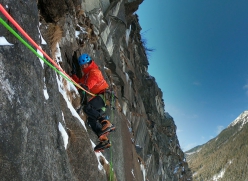 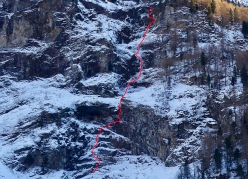 On 16 December 2018 Simon Gietl and Mark Oberlechner made the first ascent of Utopia, a new mixed climb close to Rein in Taufers in Italy.

Gietl told planetmountain.com "I had noticed this line a while ago and was curious so I asked two locals, Konrad Auer and Philipp Unterregelsbacher, for information. Philipp told me that he too had had the route in mind for years, and that back in in 2003 with Walter Unterregelsbacher he’d climbed the first two ice pitches. The line all the way to the top was still a project though, at least until 16 December when Mark Oberlechner and I climbed nine pitches, all onsight to the top. We didn’t add any bolts, and all the pegs used were left in-situ."

Utopia ascends the wall about 500 meters to the right of MFG, is graded M7+/WI5 and according to Gietl is "one of the most beautiful routes I know of these difficulties. The combination of rock, ice and frozen turf make it unique."